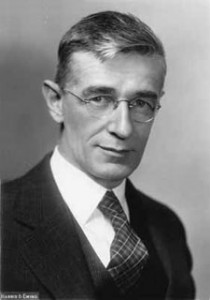 The Internet, the World-Wide-Web and hypertext were all forecast by Vannevar Bush, in a July 1945 article for The Atlantic, entitled  As We May Think.  Perhaps this is not completely surprising since Bush had a strong influence on WW II and post-war military-industrial technology policy, as Director of the US Government Office of Scientific Research and Development.  Because of his influence, his forecasts may to some extent have been self-fulfilling.
However, his article also predicted automated machine reasoning using both logic programming, the computational use of formal logic, and computational argumentation, the formal representation and manipulation of arguments.  These areas are both now important domains of AI and computer science which developed first in Europe and which still much stronger there than in the USA.   An excerpt:

The scientist, however, is not the only person who manipulates data and examines the world about him by the use of logical processes, although he sometimes preserves this appearance by adopting into the fold anyone who becomes logical, much in the manner in which a British labor leader is elevated to knighthood. Whenever logical processes of thought are employed—that is, whenever thought for a time runs along an accepted groove—there is an opportunity for the machine. Formal logic used to be a keen instrument in the hands of the teacher in his trying of students’ souls. It is readily possible to construct a machine which will manipulate premises in accordance with formal logic, simply by the clever use of relay circuits. Put a set of premises into such a device and turn the crank, and it will readily pass out conclusion after conclusion, all in accordance with logical law, and with no more slips than would be expected of a keyboard adding machine.
Logic can become enormously difficult, and it would undoubtedly be well to produce more assurance in its use. The machines for higher analysis have usually been equation solvers. Ideas are beginning to appear for equation transformers, which will rearrange the relationship expressed by an equation in accordance with strict and rather advanced logic. Progress is inhibited by the exceedingly crude way in which mathematicians express their relationships. They employ a symbolism which grew like Topsy and has little consistency; a strange fact in that most logical field.
A new symbolism, probably positional, must apparently precede the reduction of mathematical transformations to machine processes. Then, on beyond the strict logic of the mathematician, lies the application of logic in everyday affairs. We may some day click off arguments on a machine with the same assurance that we now enter sales on a cash register. But the machine of logic will not look like a cash register, even of the streamlined model.”

Edinburgh sociologist, Donald MacKenzie, wrote a nice history and sociology of logic programming and the use of logic of computer science, Mechanizing Proof: Computing, Risk, and Trust.  The only flaw of this fascinating book is an apparent misunderstanding throughout that theorem-proving by machines  refers only to proving (or not) of theorems in mathematics.    Rather, theorem-proving in AI refers to proving claims in any domain of knowledge represented by a formal, logical language.    Medical expert systems, for example, may use theorem-proving techniques to infer the presence of a particular disease in a patient; the claims being proved (or not) are theorems of the formal language representing the domain, not necessarily mathematical theorems.
References:
Donald MacKenzie [2001]:  Mechanizing Proof: Computing, Risk, and Trust (2001).  Cambridge, MA, USA:  MIT Press.
Vannevar Bush[1945]:  As we may think.  The Atlantic, July 1945.

0 Responses to “As we once thought”