Reading Natasha Vargas-Cooper’s lively romp through the 1960s culture referenced in the TV series Mad Men, I came across Tim Siedell’s discussion of a witty, early 1960s advert by Doyle Dane Bernbach for Western Union telegrams, displayed here.  Since I am unable to download the advert, in its place is this Western Union telegram sent in May 1944: 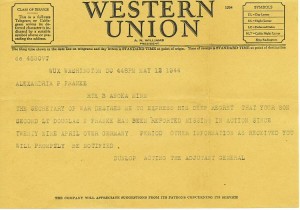 The Transmission Control Protocol (TCP) is the work-horse protocol of the Internet, and was developed by Vince Cerf and Bob Kahn in 1974.   Their division of the packet contents into a header-part (the control information) and a data part (the payload) no doubt derived from earlier work on the design of packets for packet-switched networks.   Later packets (eg, for IP, the Internet Protocol) were simpler, but still retained this two-part structure.  This two-part division is also found in voice telecommunications at the time, for example in Common Channel Signalling Systems, which separated message content from information about the message (control information).   Such systems were adopted internationally by the ITU for voice communications from Signalling System #6 (SS6) in 1975 onwards.  In case the packet design seems obvious, it is worth considering some alternatives:  the meta-information could be in a footer rather than in a header, or enmeshed in the data itself (as, for example, HTML tags are enmeshed in the content they modify).  Or, the meta-data could be sent in a separate packet, perhaps ahead of the data packet, as happens with control information in Signalling System #7 (SS7), adopted from 1980.  There are technical reasons why some of these design possibilities are not feasible or not elegant, and perhaps the same reasons apply to transmission of telegrams (which is, after all, a communications medium using packets).
The first commercial electrical telegraph networks date from 1837, and the Western Union company itself dates from 1855 (although created from the merger of earlier companies).  I don’t know when the two-part structure for telegrams was adopted, but it was certainly long before Vannevar Bush predicted the Internet in 1945, and long before packet-switched communications networks were first conceived in the early 1960s.   It is interesting that the two-part structure of the telegramlives on in the structure of internet packets.
* Footnote: As I recall, I sent my first email in 1979.
Reference:
Tim Siedell [2010]: “Western Union:  What makes a great ad?” pp. 15-17 of:  Natasha Vargas-Cooper [2010]:  Mad Men Unbuttoned. New York, NY:  HarperCollins.

0 Responses to “The long after-life of design decisions”