at 22.50 on the longest day of the Year (Northern Hemisphere). 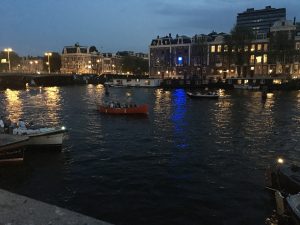 The beauty of the scene does not reveal the heat or the noise. The entire time there was an ever-changing clamour, as the motors of boats could be heard, as parties of loud party-goers with sound systems playing loudly came and went, and as conversations drifted laterally from the boats.  Only the occasional rowers were quiet. The following night at this time, the waters were almost empty, following an electrical storm in the late afternoon. The temperature had dropped ten degrees and there was a chill in the gusty winds.

Plants in an office window.