What are models for?   Most developers and users of models, in my experience, seem to assume the answer to this question is obvious and thus never raise it.   In fact, modeling has many potential purposes, and some of these conflict with one another.   Some of the criticisms made of particular models arise from mis-understandings or mis-perceptions of the purposes of those models, and the modeling activities which led to them.
Liking cladistics as I do, I thought it useful to list all the potential purposes of models and modeling.   The only discussion that considers this topic that I know is a brief discussion by game theorist Ariel Rubinstein in an appendix to a book on modeling rational behaviour (Rubinstein 1998).  Rubinstein considers several alternative purposes for economic modeling, but ignores many others.   My list is as follows (to be expanded and annotated in due course):

POSTSCRIPT (Added 2011-06-17):  I have just seen Joshua Epstein’s 2008 discussion of the purposes of modeling in science and social science.   Epstein lists 17 reasons to build explicit models (in his words, although I have added the label “0” to his first reason):

Belately, I want to record a play seen at the headquarters of The Royal Society in London last month, Let Newton Be, written by Craig Baxter, but using only Isaac Newton’s own words.     The play was interesting although the energy of the play sagged at times, particularly in the first half.   The story only barely mentioned Newton’s interest in alchemy, and seemed to overlook his brutal, deadly campaigns against money forgers later in life (or did I nap through that scene?)
The play comprised three actors, two men and a woman, who played Newton at different ages – as a child, as a young-ish Cambridge academic, and as an old man.  As a work of drama, the conceit worked well, although it was best when one of the actors was playing another person interacting with Newton (eg, Halley, and later Leibniz, who spoke in an amusing cod-German accent).  Perhaps the real Newton was not sufficiently schizoid for three actors to play him, at least not when constrained to only use the man’s written words.    As I have remarked before, Newton’s personality was all of a piece:  it is only modern westerners who cannot imagine a religious motivation for activities such as scientific research, for example, or who find alchemy and calculus incoherent.
The performance was followed by a panel discussion by the Great and the Good – two historians and two scientists.  One of the scientists was the Astronomer Royal, Sir Martin Rees, who has subsequently won this year’s Templeton Prize for Science and Religion.  The discussion was interesting, so it is a pity it was not recorded for posterity.
A review of another play about a member of the matherati, Kurt Godel, is here.

Another concert caught in Bologna this past weekend was a short concert for Palm Sunday in the Crypt of the Basilica of San Pietro.  The music was by Quartetto d’Archi G. B. Martini and Corale Convivium Musicum, playing the following programme:

The string quartet comprised  Cesare Carretta (1st), Stefano Chiarotti (2nd), Margherita Fanton (viola), and Antonio Mostacci (‘cello).
The acoustics of the crypt were surprisingly good:  despite the stone walls and columns, the low, curved ceilings bounced the sound around the chamber, and the crowd absorbed it well.  Perhaps all the palm fronds being waved helped.  The music was performed well, although the concert was over in under 30 minutes.    We were left wanting more.

A superb concert last night in Bologna, with Orchestra Mozart and the Mahler Chamber Orchestra combining forces under young conductor Diego Matheuz.    The concert took place in Auditorium Manzoni, where I have enjoyed concerts before, sometimes under Maestro Abbado.  This hall has a relatively modern interior, almost fan-shaped, with undulating wooden walls and an undulating wooden ceiling over the stage.  The acoustic is warm, bright and fast.  The stage is only small, and barely took the forces arranged last night.   The cellos were placed in the middle, with the violas on the conductor’s immediate right, and so the sound of the violas may well have been lost.   Similarly, only the percussion and brass were (slightly) elevated, the woodwinds seated at the same level as the strings. I was close enough not to miss anything from these placements.
Prokofiev’s First Violin Concerto was played by Vadim Repin, who also played Ravel’s violin rhapsody, Tzigane.  Both pieces were fiery and technically impressive, my strong distaste for Prokofiev’s music notwithstanding.   His music strikes me as truly incoherent, using types of expression (eg, multiple simultaneous keys) and modes of musical cognition that are alien to me.  My distaste is stronger than mere dislike, being incomprehension.   The abrupt change in mood, for example, between the second and third movements, seems meant to provoke the listener, as if to say, I have the power to change your attitude to this music at a whim, and to prove it, I will now do it. Who could enjoy the company of such a person?
I have heard Repin perform before, a few years ago in Barcelona (playing the Sibelius concerto).  As on that occasion, he encored with theme and variations of Carnival of Venice, a crowd-stopping showpiece of skill and effects made famous for violinists by Pagannini and for trumpeters by Arban.   This time, however, Repin began with a fiery introduction, then detoured into several bars of accompaniment vamping before launching the theme.  The vamping allowed him to signal to the orchestral musicians what to play as they joined him, something he had tried unsuccessfully in Barcelona while himself playing the theme.
The concert also included Stravinsky’s Firebird Suite, in what was certainly the most thrilling, spine-tingling, edge-of-seat performance of this work I have ever heard.  Matheuz conducted from memory, which is not nothing for this jagged music, and his energy and enthusiasm was compelling.   The principal violinists had swapped places for this piece.   Before the interval, the principal for the Mahler CO, Gregory Ahss, was lead.   For the Stravinsky after interval, Orchestra Mozart’s principal, Raphael Christ, took over.   I was seated close enough to see them play, and both were very impressive.   Both people to watch, along with Matheuz.

Programme:
Maurice Ravel:  Daphnis et Chloé, Suite #2.
Sergei Prokofiev: Concerto for Violin  #1 in D Major op. 19
Maurice Ravel: Tzigane, Rhapsody for violin and orchestra
Igor Stravinsky:  L’Oiseau de feu (Suite, version of 1919).
The Auditorium Manzoni is mildly fan-shaped, a shape that is not common for concert halls.  (Another example is the art deco Philharmonic Hall in Liverpool, UK, whose fan shape is much more pronounced.)  The walls around the stage and the hall, along with the ceiling over the stage have an undulating wooden veneer, which would help sound propagation in diverse directions.   The balcony overhands a large part of the auditorium, but at quite a high level, so that seats under the balcony are not “dark” in terms of the sounds they receive from the stage.

Hearing a concert by Vadim Repin, the second time I have heard him play, I thought to list all the classical solo violinists I have heard perform live (in alpha order, with the music where recalled):

Writing in Bertinoro, Italy, I have just learnt of the death earlier this year of J. Martin Harvey (1949-2011), a friend and former colleague, and one of Zimbabwe’s great mathematicians.

Martin was the first black student to gain First Class Honours in Mathematics from the University of Rhodesia (as it then was, now the University of Zimbabwe), the first person to gain a doctorate in mathematics from that University, and the first black lecturer appointed to teach mathematics there. (Indeed, his three degree certificates name three different universities – London, Rhodesia, and Zimbabwe – but all were granted by the same physical institution.) He later became an actuary, one of the few of any colour in Zimbabwe, but this was a career that lost value with the declining Zimbabwe dollar: actuarial science is about financial planning under uncertainty, and planning is impossible and pointless in an economy with hyper-inflation. He then became part of the great Zimbabwean diaspora, lecturing at the University of the Western Cape, in South Africa.

Martin was a true child of the sixties, with all the best qualities of that generation – open, generous, tolerant, curious, unpompous, democratic, sincere. He was a category theorist, and like most, a deep thinker. Martin was a superb jazz flautist, and on his travels would seek out jazz musicians to jam with. He wrote and recited poetry, and indeed could talk with knowledge on a thousand topics.

I once spent a month traveling the country with him on a market research project we did together, and his conversation was endlessly fascinating. Despite our very different childhoods, I recall a long, enjoyable evening with him in a shebeen in rural Zimbabwe talking about the various American and Japanese TV series we had both seen growing up (which I mentioned here). Among many memories, I recall him once arguing that a university in a marxist state should have only two faculties: a Faculty for the Forces of Production, and a Faculty for the Relations of Production. There was great laughter as he insisted that the arts and humanities were essential to effective production, and so belonged in the former faculty; this argument was typical of his wit and erudition.

Our mutual friend, Professor Heneri Dzinotyiweyi, another great Zimbabwean mathematician, has a tribute here. I send my condolences to his wife, Winnie Harvey, and family. Vale, Martin. It has been an honour to have known you. 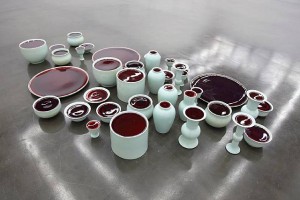 The image shows Container Series (2009), a ceramic installation by contemporary Chinese artist Liu JianHua, recently acquired by the Art Gallery of New South Wales.    From the description of the work by the AGNSW:

In this beautiful celadon work ‘Container Series’ 2009, Liu acknowledges the magnificent ceramic heritage of China by re-creating traditional ritual vessel shapes such as stem cups and ‘gu’ ( wine vessel), and placing them alongside more contemporary shapes to present an impressive installation of 37 pieces of varying size and shape. The pieces are randomly arranged, in contrast to the formal presentation of temple and imperial settings of the past. Arranged as an installation they are placed as on a blank canvas. Liu has used a celadon glaze, in emulation of the classic greenwares of the Song dynasty (960-1279). All the pieces look to be filled with a red liquid, but the ceramics are in fact hollow, with a red glaze on top of each piece giving the illusion of liquid. Like the celadon, the red is another classic of the Chinese ceramic repertoire, traditionally known as ‘sang de boeuf’ or oxblood (‘langyao hong’). The way the artist has used the two colours to dramatically contrasting effect is innovative and effective. The red colour evokes blood, and the work may be a homage to those whose blood has been spilt in the pursuit of specific goals. Each piece is handmade and thrown on a wheel. They were glazed first with the celadon then the red ‘langyao hong’ glaze, after which they were fired only once in a kiln at about 1342 degrees centigrade. Most parts were made in varying numbers of editions.
Eugene Tan has noted of Liu’s work that it, ‘reflects the complex ontological relation between the production of consumer goods in China and the international art system, thereby also reflecting the recent, rapid growth of the Chinese contemporary art market.’ (Tan, undated)   As such, Liu’s work makes allusions to the present situation in China both culturally and economically.”

[Note: The commentary by Eugene Tan is dated 2009-07-02 on the web-page linked to here.]
A description of another installation of this artist can be found here.