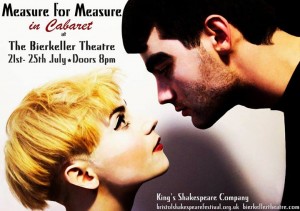 On Friday, I was privileged to see a final dress rehearsal of King’s Shakespeare Company’s production of Measure for Measure.  Performed as a cabaret, the production is set in Weimar Germany, and the songs make this a production to remember.  They are fast, witty, tuneful and memorable expressions of the interior lives of the main characters, and they add a depth of meaning to a play which is otherwise confusing.  It is impressive how much intellectual heft and coherence the cabaret setting gives to the play.
The production is directed by Lauren O’Hara, with music by Henry Keynes Carpenter, and the cast includes:  Rhia Abbott, Henry Keynes Carpenter, Hannah Elsy, Freddie Fullerton, Serena Grasso, William Holyhead, and Rupert Sadler.   The production is only on for five nights, tomorrow Monday 21 July to Friday 25 July 2014, at the Bierkeller in Bristol. Go see it if you are anywhere nearby. 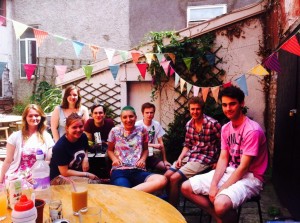 Lucy Corley has a review  here.

On the categories email list on 5 March 2006, Ronald Brown quoted the following paragraph on mathematical speculation from a letter dated 14 June 1983 which he had received from Alexander Grothendieck:
END_OF_DOCUMENT_TOKEN_TO_BE_REPLACED

The latest in a sequence of lists of recently-read books.
Francis King [1970]:  A Domestic Animal. Faber Finds, 2014.  A well-written account of unrequited love that becomes an obsession.  Both the plot and the dialogue are, at times, unbelievable, although the obsession and the emotions it provokes in holder and object are very credible.
END_OF_DOCUMENT_TOKEN_TO_BE_REPLACED 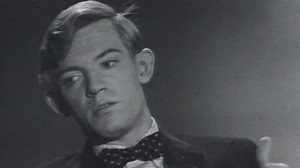