Surfing idly, I encounter a reference to one Andrew Onderdonk, an international lawyer who visited with George Santayana (1863-1952) in the 1920s. The question that immediately entered my mind is the one I am sure occurs to you too: Is this man a descendant of the second Protestant Episcopal Bishop of Pennsylvania? That was Henry Onderdonk (1789-1858), who was supposedly replaced as Bishop due to a problem with alcohol. Bishop Henry’s successor, the third Episcopal Bishop of Pennsylvania, was a mathematician and philosopher named Alonzo Potter (1800-1865), whose grandson Warwick Potter (31 October 1870-11 October 1893) was a student and close friend of Santayana’s at Harvard. Santayana wrote a very moving quartet of sonnets to him, following his early death. One sonnet is here, and posts on Santayana here. I imagine Warwick Potter would be completely forgotten now if not for Santayan’s consoling poems.

It seems that Andrew Joseph Onderdonk (1889- ?) had also been a student of Santayana’s at Harvard, and was still alive in the mid-1960s, when he offered to sell Santayana’s writing chair to journalist Joseph Epstein.

Warwick Potter’s father was Major General Robert Brown Potter (1829-1887), a Civil War general on the Union side and subject of a famous photo, taken around 1864.  The photo (below) is mainly well-known because the photographer, Mathew Brady (1822-1896), included himself in it. One would be tempted to call this action post-modernist, if painters from the renaissance onwards had not done the same. Brady’s louche posture against a tree on the right of the picture contrasts with the formality of comportment of the General, standing hatless at the centre of his behatted men, who all face him while he faces us. I wonder about the names and fates of the other soldiers in the photo. 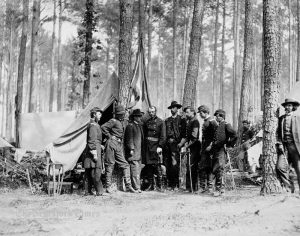 Alonzo Potter’s first wife, and the mother of Robert Potter, was Sarah Maria Nott, the only daughter of Eliphalet Nott (1773-1866), President of Union College, Schenectady, New York, from 1804-1866.  Warwick Potter had three brothers and a half-sister: Robert Burnside Potter, Abby Potter, Austin Potter and Frances Tileston Potter. He was born on 1870-10-31 in Lemington, near Newcastle-upon-Tyne and died on 1893-10-11 in Brest, Brittany.  I find it most consoling that I am able to place Warwick Potter in his family, with both his father and paternal grandfather being identified, and help preserve his memory. He has now, for me, a local habitation and a name.

New South Wales tomorrow has its first premier of Armenian descent, Gladys Berejiklian, leader of the Liberal Party, who is also the second woman to be premier.  Her first language was Armenian, and she only learnt English once she went to school. Her great-grandparents were apparently killed in the Ottoman genocide of Armenians in 1915.
In addition to the majority Anglo-Celts, the state of NSW has had premiers of Hungarian, Italian and American descent. Her only fellow female premier, Kristina Keneally, was born in the USA. Until recently, the Governor of NSW was the very admirable Professor Marie Bashir, who is of Lebanese descent. There was a moment in 2010 when it was women all the way up!
As far as I am aware, the only American Governor of Armenian heritage has been George Deukmejian, Governor of California from 1983-1991.
Some previous discussion of leaders from minority groups here.