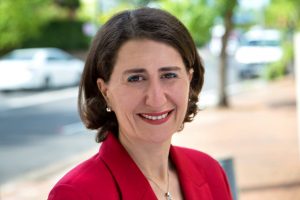 New South Wales tomorrow has its first premier of Armenian descent, Gladys Berejiklian, leader of the Liberal Party, who is also the second woman to be premier.  Her first language was Armenian, and she only learnt English once she went to school. Her great-grandparents were apparently killed in the Ottoman genocide of Armenians in 1915.
In addition to the majority Anglo-Celts, the state of NSW has had premiers of Hungarian, Italian and American descent. Her only fellow female premier, Kristina Keneally, was born in the USA. Until recently, the Governor of NSW was the very admirable Professor Marie Bashir, who is of Lebanese descent. There was a moment in 2010 when it was women all the way up!
As far as I am aware, the only American Governor of Armenian heritage has been George Deukmejian, Governor of California from 1983-1991.
Some previous discussion of leaders from minority groups here.

0 Responses to “Our Glad”