[Photo of a Yellow Bird.]

Last week was the 25th anniversary of the violent suppression by the Chinese People’s Liberation Army of the non-violent protest in Tiananmen Square, Beijing, on 4 June 1989.  How distant now is that spirit of hope and confidence that existed in the Spring of that year, a spirit slaughtered on the Square?

In the years since, we have learnt that not all the senior leadership of the Chinese Communist Party were in agreement with the events of Tiananmen.   In particular, the brave Zhao Zhiyang (1919-2005), at the time the General-Secretary of the Central Committee of the CCP, opposed the action and suffered politically and personally for his views.  It seems that Zhao was not alone.  A New York Times investigation reports that Major-General Xu Qinxian, leader of the 38th Group Army, refused to execute an order to participate in the action, a refusal for which he was court-martialed, imprisoned, and expelled from the CCP.   Other military officers, possibly including the Defence Minister himself, Qin Jiwei (1914-1997), also opposed the action and/or refused to shoot civilians.

By this post, I wish to remember all those who struggled for freedom and democracy across China that spring, and especially all those who died in that struggle. Those, like Zhao and Xu, who bravely refused to join the action are also remembered.
A Luta Continua!
“The mantis stalks the cicada, unaware of the yellow bird behind.”

Kriegsspiel 1914:   A war game re-enactment of the battles between German and Allied (French, Belgian, BEF) forces on the Western Front between late August and late September 1914, organized by Philip Sabin of the War Studies Department at King’s College London.   Our team comprised Evan Sterling, Nicholas Reynolds and myself, and played as Germany.  We beat the Allies, capturing more territory than Germany had captured in actuality in 1914.  In other words, we not only beat the Allies, we beat History.
The photo shows the final placement of German forces (black boxes) after 6 rounds of fighting, with the yellow boxes showing territory held by Germany.     Cells without yellow boxes are held by the Allies.  This was immense fun.   (Photo credit:  Nicholas Reynolds.) 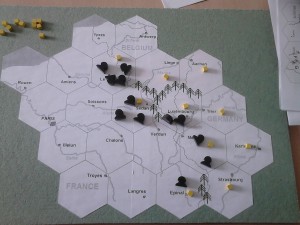