The Houses of Parliament from St Thomas’ Hospital on a rainy mid-week morning. 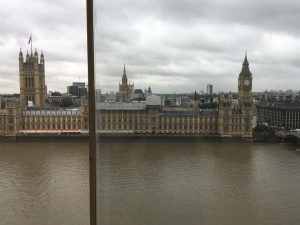 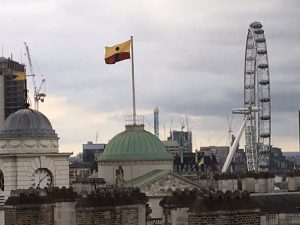 The British journalist Chapman Pincher (1914-2014) became convinced that Roger Hollis (1905-1973), Director General of MI5 between 1956 and 1965, had been a Soviet agent, supposedly working for GRU, Soviet military intelligence.  Pincher wrote a book, Treachery, in 2009 to present the full case for this claim.  Most of the evidence is circumstantial and, considered individually, not greatly persuasive.  But assembled and concatenated, it is strongly compelling. Hollis as Soviet agent is certainly the simplest overall explanation for the many coincidences, Western espionage failures, Soviet espionage successes, and multiple instances of MI5 inaction and bumbling idiocy that seemed to accompany Hollis’s career.  He wielded his pocket veto so often and so successfully, there was surely something up. Opponents of the Hollis-as-spy theory need not only to find a better candidate but also to provide an alternative explanation for his career-long pattern of inactions, delays, and ditherings at some times, and fast, resolute actions at others, in each particular case objectively favouring the interests of the USSR.

One supporting sub-claim is that Hollis is the spy working inside MI5 codenamed Elli by a Soviet defector in 1945, a name also used in other decrypted Soviet communications. Apparently, the Soviets believed that the agent named Elli had some Russian family connection, perhaps pre-Revolutionary. Here is Pincher (Location 432 of the 2011 Kindle edition):

Colonel John Lash, a Russian scholar at Government Communication Headquarters (GCHQ), the signals interception station based at Cheltenham, assured me that ‘something Russian’ must have meant something pre-revolutionary. Otherwise, the statement would have been ‘something Soviet’. Then, in 1985, while browsing through a book called Along the Road to Frome, one of several written by Hollis’s elder brother Christopher, I made a most relevant discovery. Members of the Hollis family and other relatives believed, with genealogical evidence, that they were directly descended from the Russian czar Peter the Great, and were rather proud of it! In that book, published in 1958, Christopher had stated: ‘I did, indeed, I suppose, share with my distant and much removed cousin, Annie Moberley, a claim to descent from Peter the Great.’ In another of his books, Oxford in the Twenties, when explaining his rather peculiar looks, Christopher stated that he was ‘the inheritor of a good deal of mixed blood, but it came from Eastern Europe’.

Annie Moberley’s father, George, had been born in St Petersburg, where his forebears were well established as merchants before the revolution. He became Bishop of Salisbury and firmly believed in his descent from the heroic czar. The Hollis brothers’ mother, formerly Margaret (Meg) Church, was related to Richard Church, a dean of St Paul’s in London, whose wife was a direct descendant of a woman called Sarah Cayley, who allegedly derived from an illegitimate son of Peter the Great. The Moberleys also traced their connection with the czar through Sarah Cayley.

Christopher Hollis, who was highly intelligent, certainly believed in the royal relationship, however distant. Whether or not it was real or taken seriously by other members of the Hollis family, they all knew about it. If Roger had been Elli, he could, directly or indirectly, have revealed this Russian connection to some Soviet contact, who would have informed Moscow in one of the enciphered messages, which would explain how Gouzenko’s deskmate had heard about it.

Whether Roger believed the Russian connection or not, it is inconceivable that he failed to appreciate the danger that it might make him suspect if his MI5 superiors heard about it following Gouzenko’s statement. Confirmation of the Russian connection was the missing link in Gouzenko’s evidence, and had it been known in MI5 Hollis should surely have been closely questioned about the exceptional ‘coincidence’, along with the other matching features.

What better fit could there be for Gouzenko’s statement –‘he has something Russian in his background’? No other Elli candidate has ever fulfilled the description. Gouzenko could not possibly have known anything about Hollis or his family when, as a young cipher clerk, he had made his original statement about Elli to the Canadian authorities in 1945. It was an inexcusable gaffe by Peter Wright –later the self-styled ‘Spycatcher’ –and the other counter-intelligence investigators of the Hollis case to have failed to read the biographical books by Roger’s well-known brother, which were on the shelves of many libraries.”

I did, indeed, I suppose, share with my distant and much removed cousin, Annie Moberley [sic] of Versailles fame, a claim which Mrs Iremonger’s The Ghosts of Versailles had not at that time exposed, to descent from Peter the Great. But even the existence of that claim had been kept from me. The exposition of it would have raised too many embarrassing questions about mistresses and illegitimacy. So I had to content myself with being Irish, and that indeed gave me a sufficient opportunity of political eccentricity.” (Hollis 1958, page 15).

Christopher Hollis is speaking here about his childhood.  He does not say at what age he became aware of the family claim of descent from Peter the Great.  The passage is sufficiently vague that he may only have become aware of it with the publication in 1956 of Iremonger’s book about the Versailles Incident, an incident in 1901 when Annie Moberly and a traveling companion later came to believe they had engaged in time travel during a visit to Versailles.  However, Iremonger’s book itself refers to an earlier book by Edith Olivier (1872-1948), a life-long friend of and, through Edith’s mother, a cousin of Annie Moberly, as the source, a book of essays published in 1938 (Olivier 1938).  Of course, neither Christopher Hollis nor Roger Hollis may have been aware of Olivier’s 1938 book, or her 1945 book, both of which talk about the Moberly connection to Czar Peter the Great (1672-1725).  Olivier notes that Annie Moberly kept a portrait of her Russian-born grandmother Sarah Cayley in her rooms at St Hugh’s Hall, Oxford, where she was the Founding Principal (1886-1915).   She was an Honorary Fellow and member  of the Governing Council of the Hall from her retirement in 1915 to her death in 1937. According to Anna Thomasson’s biography of Miss Olivier (Thomasson 2015, page 183), Annie Moberly was still living in Oxford in 1929. Did Roger Hollis meet with her while he was at Oxford during 1924-1926? If so, he presumably would have seen the portrait of their common ancestor Sarah Cayley on her walls.

Pincher has not revealed the full extent of Hollis-Cayley family connections in his 2009 book, perhaps because he did not know them. His case is in fact stronger than he recounts.  He is correct that Roger Hollis’ mother Mary Margaret Church (1874-1941) was related to Richard William Church (1815-1890), Dean of St. Paul’s Cathedral. Richard was her uncle, brother to her father, Charles Marcus Church (1823-1915). And Richard had married Helen Frances Bennett in July 1853. But Mary’s father, Charles Church, Canon of Wells Cathedral, also married a Bennett sister, both daughters of Mrs Emily Bennett, nee Moberly. Emily Moberly was the daughter (one of 3 girls and 8 boys) of British-born Russian-based merchant, Edward Moberly, and Sarah Cayley (born 1764-), daughter of John Cayley (1730-1795), British Consul-General in St Petersberg.  Emily’s brother George Moberly (1803-1885), was born in St Petersberg and was later Bishop of Salisbury, from 1869 to 1885; in December 1834, he married Mary Anne Crokat (1812-1890), who was from a family of Scottish merchants long in Italy, as the Cayleys had been in Russia.

The wife of John Cayley (1730-1795) and the mother of Sarah Cayley Moberly was also called Sarah.  She was Sarah Cozens Cayley (1732-1803), who was born and died in St. Petersburg, and was a daughter of Richard Cozens (1674-1735) and Mary Davenport.  Cozens was British, and was Chief Shipbuilder to the Czar. His wife Mary was a daughter of Richard Davenport, also working as a shipbuilder for the Czar, and his wife Mary Dodd.  The eldest sibling of Sarah Cayley was Alexander Cozens (1717-1786), who was to achieve later renown as a landscape painter, as did his son, John Cozens (1752-1797).  Alexander Cozens was a godson of Czar Peter the Great, and also long rumoured to be the Czar’s illegitimate son. This may have been the source of the family rumour of Czarist descent.  The four sons of George Hollis and Mary Margaret Church, including Christopher Hollis and Roger Hollis, were direct descendants of Sarah Cozens Cayley and Sarah Cayley Moberly.  Another child of John Cayley and Sarah Cozens Cayley was Henry Cayley (1768-1850), whose children included the mathematician Arthur Cayley (1821-1895) and writer Charles Cayley (1823-1883), a close and life-long friend of poet Christina Rosetti.

One of the 15 children of Bishop George Moberly and Mary Anne Crokat was Charlotte Anne (“Annie”) Elizabeth Moberly (1846-1937), who wrote a book about her father, Dulce Domum (Moberly 1911).  As mentioned above, she was a participant in a supposed episode of time travel, the Versailles Incident (aka the Ghosts of Petit Trianon Incident) of 1901.  (Edith Olivier, in her memoir of 1938, also recounts an episode she, Edith, also had of supposed time travel, this time on Salisbury Plain.)  Both Christopher and Roger Hollis were first cousins twice removed of Annie Moberly, and the Crokat-Church and Crokat-Bennett marriages means the families were triply connected.  Moreover, the father of Christopher and Roger Hollis, the Right Reverend George Hollis (1868-1944), was also an Anglican clergyman and Bishop of Taunton, from 1931-1944.  One would expect that Bishop George Hollis knew his father-in-law Charles Church and knew of wife’s other ecclesiastical relatives, Richard Church (who was a prominent Anglican writer) and Bishop Edward Moberly; although much younger, he may also have met them. (Edith Olivier was also from an Anglican Church family, as the daughter of a Canon and the grand-daughter of a Bishop, Robert Eden.)

Of course, none of these connections or the fact of his brother’s knowledge prove that Roger Hollis knew that his ancestors had been merchants in Russia in the 18th and early 19th centuries, or that he had heard the claim that his family were illegitimate descendants of Peter the Great.  But the likelihood that he did not, it seems to me, is significantly less than the likelihood that he did.

Lucille Iremonger [1956]: The Ghosts of Versailles. Miss Moberly and Miss Jourdain and their Adventure. London, UK: Faber and Faber.

Anna Thomasson [2015]: A Curious Friendship: The Story of a Bluestocking and a Bright Young Thing. London, UK: Macmillan.