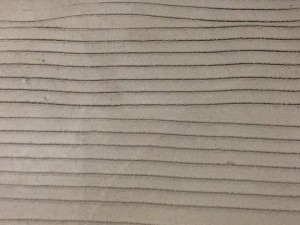 Workmen replacing the wall tiles at Temple Underground Station in London have temporarily revealed patterns on the concrete walls that bring to mind the sublime optic minimalist art of Alice Nampitjinpa. For a limited time only. Guaranteed to make you homesick for Australia.
Reminded of Nampitjinpa’s Tali at Talaalpi (1998).

“Nothing that is mere wordplay is ever witty,” says Clive James in today’s Grauniad. This statement is so profoundly wrong, one has to wonder if it is meant to be satire. To see how wrong it is, start by reading Shakespeare’s Sonnets, where mere wordplay produces some of the most clever wit in English. Finish by reading or watching pretty much any play by Tom Stoppard, or any episode of Seinfeld. What was James thinking?
END_OF_DOCUMENT_TOKEN_TO_BE_REPLACED

The African Resistance Movement (ARM) was an underground movement engaged in sabotage and violent resistance to the South African apartheid regime. Formed in late 1960, it just predates MK (uMkhonto we Sizwe) and Poqo, the armed wings of the ANC and PAC, respectively (although its public announcement occurred 5 days after that of MK). The founders of the ARM were members of the non-racial Liberal Party, whose leaders had been arrested, detained, and banned in the state of emergency declared in the wake of the Sharpeville Massacre in March 1960.  Both the ANC and PAC were declared banned organizations in that same period.  These government actions led many reasonable people to believe that peaceful, democratic protest was no longer possible in South Africa.  The ANC, after all, had been engaged in peaceful public protest since its formation in 1912 and still found itself declared illegal.

The ARM operated between 1960 and mid 1964.  According to South African History Online, ARM members came from three distinct groups:  members of the Liberal Party, whom I believe were mostly white;  former members of the Transvaal ANC Youth League who had defected to form the African Freedom Movement, who were mostly black;  and, former members of the South African Communist Party, some of whom were Trotskyites who had been expelled from the party.  Jonty Driver estimates that the ARM had 58 members: 17 in Cape Town, 27 in Johannesburg, and 14 elsewhere (Durban, PE, Grahamstown, Europe and Canada).  I can find no list of members online, so decided to compile my own.  I have found what I believe are the names of 35 members, listed below. My sources are also given below.

The clear policy of the organization was to not undertake any actions in which people could be hurt.  All but one of the 25 actions undertaken adhered to this rule. Most involved attempts to bring down power pylons or similar state-owned infrastructure.  The final action, a bomb left in a suitcase on Johannesburg Railway Station on the afternoon of 24 July 1964, sadly killed one elderly lady, Mrs Ethel Rhys, and maimed several others, including her teenage grand-daughter.  Warning calls had been placed to the police and to two newspapers, but no efforts were made by the authorities to clear the platform.  It is still not known whether this inaction was deliberate or not.

The planting of a bomb in a station was contrary to ARM policy and practice, and was undertaken when almost all ARM members had been arrested or had fled into exile. It was the solo work of John Harris, who was subsequently tried and executed for murder. Harris was the only white person tried and executed by the apartheid regime for a political crime (although others, such as Rick Turner and Ruth First, were assassinated without judicial process).  Several ARM members received gaol terms, and I note these below.  Members of ARM also bravely assisted in spiriting people out of the country, both fellow ARM members and others wanted by the security police, as did the underground railroad that operated later in Rhodesia.  One ARM member, Michael Schneider, went on to help spirit Jewish people out of various countries, including Bosnia, Ethiopia, Iran, Syria and Yemen.

The decision by any individual to embark on a campaign of violent resistance cannot have been an easy one, even given the already-evident violence of the state and its organs in South Africa.  Moreover, with organisations such as the ANC declared illegal,  ARM membership would likely have led to arrest, and arrest to torture or worse, as indeed it did. Thus, ARM membership would have required considerable courage.

CJ ‘Jonty’ Driver [2015]: The Man with the Suitcase: The Life, Execution and Rehabilitation of John Harris, Liberal Terrorist. Crane River.

Hugh Lewin [2011]: Stones against the Mirror: Friendship in the time of the South African Struggle. Cape Town, RSA: Umuzi.

Postscript (Added 2016-01-17): In his apologia, the late Adrian Leftwich describes his behaviour as “shameful, harmful and wrong” (2002, page 25).  It is not clear to me if he is referring to his membership of ARM as a whole (which is the focus of the preceding part of that section of the memoir) or just his fast collapse under police interrogation, a collapse in which he gave up the names of his fellow members.  In either case, he was mistaken.  Everyone in such circumstances will eventually succumb to torture and so there is no shame and no wrong in giving up names.  There was harm, but this arose from the speed of his collapse (he held out just a day, it seems) and the extent of his prior knowledge.  Membership of ARM was certainly neither wrong nor shameful, and only for one action harmful. Where Leftwich appeared to have erred, at this distance of time and morality, is in tradecraft: he should not have known so much about the organization, nor its membership (ie, he should have had fewer names to give up); he should not have saved a field guide for selecting targets in a book in his flat; his girlfriend should not have stored explosives in her flat; he and the other members should have made plans to alert one another, via coded or secret means, of any arrests; they should each have had well-practised plans and places for hiding, or plans for escape abroad; etc.  In a sense, the poor tradecraft was an indication of integrity of intentions: anyone engaged in armed struggle for its own sake, or for the thrills it provided, would have been more professional in undertaking it.

On 14 January 1965 in New York City, Bob Dylan recorded the song “Subterranean Homesick Blues”, and the single was released on 8 March 1965.  The song includes the lines:

You don’t need a weatherman
To know which way the wind blows.

The metaphor expressed in these lines was very influential.  For instance, the main left-wing armed terrorist movement in the USA, formed in 1969, called itself Weatherman, or The Weathermen, later calling itself The Weather Underground.
Was the metaphor originally due to Dylan?  We can answer NO to that question.   On 18 March 1957, Time magazine reported on political events in Poland, where the ruling Polish United Workers Party had recently seen some liberalization of its earlier Stalinism (and the return to power of reformist communist Wladyslaw Gomulka), followed by something of a reversal back to hard-line policies.  The Time article began:

There is usually one Communist who knows the way the wind is blowing long before the official weather vanes swing into line. In stormy Poland he is a longtime Stalinist timeserver named Jerzy Putrament. When Wladyslaw Gomulka broke with Moscow last October, Comrade Putrament was so enthusiastic in Gomulka’s support that Pravda publicly rebuked him for saying that he preferred “imperialist Coca-Cola to the best home-distilled vodka.” Last month Weatherman Putrament held up a moist forefinger and got the feel of a new breeze blowing through Poland.

END_OF_DOCUMENT_TOKEN_TO_BE_REPLACED

For some years starting in 1970, the Australian National University in Canberra hosted a public lecture series named for war-time Labor Prime Minister, John Curtin. As the list of eminent speakers below indicates, this lecture series honoured Curtin and the labour movement. In 1979, the chosen speaker was the prominent right-wing journalist, Alan Reid. Although he had known Curtin and Curtin’s successor as PM, Ben Chifley, Reid had worked as a journalist in the Packer stable, had played a part in the Labor split in the 1950s, had privately advised Menzies and Holt, and had deplored the Whitlam government.  Even Liberal PM John Gorton thought Reid despicable, famously saying once that while he, Gorton, had been born a bastard, Reid had become one through his own efforts.   Reid was an entirely inappropriate person to give a lecture in a series honouring Curtin.
END_OF_DOCUMENT_TOKEN_TO_BE_REPLACED