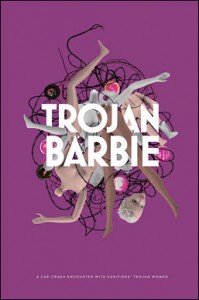 When a group of people jointly undergo an intensely searing experience, especially one where they face a mortal enemy or opponent, a bond is created between the participants that outsiders can find hard to penetrate or even to understand.    Soldiers in battle, for example, often experience this, as good novels and films have long shown.
Last night, the audience at a King’s Players’ production in London had such an experience, and we will remember for the rest of our lives the courage and fortitude, resilience and – yes, dammit! – just plain, old-fashioned grit we all showed in the face of great odds.  Nobody left, nobody laughed out loud, nobody became an alcoholic, nobody set off the fire alarm to bring this cruel and unusual torment to an end.    During the quiet patches, those long dark nights of the soul, our focus on survival was so intense that the only sound you could hear was the swiveling of eyes.
Our first enemy was the play itself, Trojan Barbie, by Christine Evans.   What an appalling piece of radfem agitprop!  The writing is surely a parody of feminism, not intended to be serious, written as if by a teenager discovering poetry for the first time.  The male characters are all evil rapists and thugs, and the women are either harlots or mad.     Even the everywoman character Lotte is dotty.  Not a single character appears real or embodied, a normal human being.   No one grapples with the actual moral dilemmas of war, no one weighs pros and cons of different courses of action, not even in dialogue with one another.    What plot there is is too ridiculous to be described, but involves unexplained time travel between ancient Troy and the present-day, with scenes set in doll repair shops, Mediterranean street cafes, refugee camps, battlefields, and the odd zoo.    You couldn’t make it up if you tried.
Our second enemy, colluding with the first,  were the cast and crew.  Given the flaws of the script, one can only sympathize with actors having to make something of this.   But why would anyone even try?    Life is too short to waste it on such dross.    And if, for some reason, you had to try, why not do it well?   Why act badly?   Why run around like a horse?  Why impersonate Che Guevara and Zsa Zsa Gabor?  Honestly, the only person missing from the production was Carmen Miranda with her hat made of fruit – although, there was in fact a samba.  What was that doing there?
And the set!   It included the world’s largest collection of Barbie Dolls, a massive pink cellophone heart,  and the odd tiger.   What normal person could possibly imagine that a large stuffed animal, a children’s toy, would convince us we are in a zoo?  At first I thought it was intended as a visual metaphor for something else, something profound, perhaps a subtle reference to well-known war poet William Blake.  (“Tyger! Tyger! Burning bright, In the forests of the Night.”)   But No:  the stuffed tiger behind a cage on stage was intended to be what is was:  a tiger in a zoo.  It roared through the sound-system, and it magically moved between scenes, sometimes lolling this way, and sometimes that.  I have to say its acting was perhaps the most realistic of the evening, and I’m sure the tiger’s agent will be fielding many calls this morning.
No one would be converted to the merits of feminism by seeing this play, and lots of people would be deconverted.   But that’s the usual way with agitprop:  if you preach only to the choir, you lose the rest of the congregation.  But of course, as with all agitprop, the preaching is not aimed at converting anyone, it’s aimed at making the preachers feel good about themselves.  Shame about the poor audience, but.
However, we did make it through, we survived to the end without a single casualty.  True, we lost two hours of our life that will never be regained.  But we saw what we were all capable of under extreme pressure, we showed grace under fire, and we stood by each other right to the end.  Being under fire together has made us life-long comrades, and at the annual reunions we survivors will no doubt tell and retell our stories of the time we fought Trojan Barbie, like the Band of Brothers that we now are.
Message to Homer:  Your position as Trojan War historian is safe. No need to call your office.

PS (2014-04-06):  Another review is here. “The stuffed animal representing the tiger was a bit unnecessary”

This poem was written by Natalya Gorbanevskaya, upon the death in 1983 of Vadim Delone, her fellow democracy protestor from August 1968.

Epitaph
(On the death of Vadim Delaunay)
Closer than a brother, the first and youngest
of us seven, whence no return.
Sweeter than sweet life, whereas there were seven,
hacking, digging the frozen earth?
To fall asleep that way, and to wake, detached from the earth,
beyond exile, KPP, barbed-wire . . .
beyond the thorny stars.  Pray for us,
offer your fraternal help.