Today, 19 February 2017, is the 80th anniversary of the crash of the Stinson in Lamington Ranges National Park in Southern Queensland, half a kilometre from the border with New South Wales, in 1937. I attended the 50th anniversary commemoration in February 1987, where I met some of the original rescue party, as I reported here. The plane was the Stinson Model A Brisbane. Another model A is shown here: 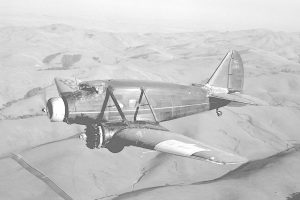 The plane was on a scheduled Airlines of Australia flight from Brisbane to Sydney, with 2 pilots and 5 passengers on board. Both pilots and 2 passengers died in the crash. One passenger, James Westray, went for help, but died after falling down a waterfall.  Judith Wright, who later lived in nearby Mount Tamborine for two decades, wrote a poem about Westray, The Lost Man. The two survivors, John Proud and Joseph Binstead, owed their rescue to the intuition and perseverance of legendary bushman Bernard O’Reilly.
The passengers and crew were:
Joseph Robert Binstead, wool broker, of Manly NSW
John Seymour Proud, mining engineer, of Wahroonga NSW
William Walden Fountain, architect, 41 of Hamilton, Brisbane QLD (Originally from New Jersey)
James Ronald Nairne Graham, Managing Director, 55 of Hunters Hill NSW
William James Guthrie Westray, Insurance Underwriter, 25 of Kensington, London, England
Commercial Pilot, Beverly George Merivale Shepherd, 25 of Sydney NSW
Commercial Pilot, Reginald Haslem Boyden, 41 of Randwick NSW.
Proud (1907-1997) went on to a prominent career as a mining engineer and executive, and was a generous philanthropist.  Some more information can be found here.
A report in the Beaudesert Times on the 80th anniversary trek is here.