In January 2009, the Independent published a story speculating on an affair between the composer Felix Mendelssohn and the Swedish soprano Jenny Lind. I have only just discovered that the Journal of the Royal Musical Association published an article by George Biddlecombe in 2013 which purports to get to the bottom of this story, and concludes that “Mendelssohn wrote passionate love letters to Jenny Lind entreating her to join him in an adulterous relationship and threatening suicide as a means of exerting pressure upon her”.

But the evidence presented in the paper supports no such claims. A half-competent lawyer for the defence could drive a coach and pair through the material presented here. A paper written in 2013 refers to two documents (not apparently in the public domain) written in 1980, describing a post-prandial conversation in 1947, a conversation about some letters allegedly discovered at Lind’s death in 1887, letters which were purportedly written by Mendelssohn to Lind before his own death in 1847. Where are these letters? Allegedly burnt at the time of their re-discovery in 1887. Who read them? As far as I can tell from Biddlecombe’s paper, possibly only Lind’s widower, Otto Goldschmidt, a man who died in 1907. What language were they written in? Presumably German, since that was Mendelssohn’s mother tongue, and I believe Lind spoke it. Could the various English solicitors who pepper this story and who MAY have been present at the discovery and burning of the letters in 1887 read German? Even if they could, did anyone other than Goldschmidt actually read the letters?

Did these letters actually exist? This is not obvious to me, and the evidence is only third- and fourth-hand. But even if they did exist, we have only Otto Goldschmidt’s alleged word, at several removes over 126 years, to say that the letters contained statements of passion by Mendelssohn to Lind. They may have been shopping lists, for all we know with certainty. Even though the various intermediaries in this Heath Robertson-like story may have been lawyers of integrity, and fine, upstanding men (as Biddlecombe seeks to show), who knows what Goldschmidt’s motivations may have been, whether in 1887 or later. All here is hearsay, and hearsay repeated after long intervals of time, and buried in obscure documents not open to our inspection. No court would accept such ramshackle, hearsay evidence for the claims made in this paper. And perhaps George Biddlecombe also realizes this, since he includes a discussion of other sources (eg, third-party letters, memoirs) to buttress the claim of an affair. But these other sources, too, I find to be less than compelling. A hill of beans is what they don’t add up to.

What a shame that this paper traduces the reputations of two people, both long dead, on such flimsy grounds. What a shame that others rush to endorse its argument. The problem is both too much imagination and too little. An affair is imagined when the evidence – the firm, uncontestable, irrefutable evidence – does not support any such claim. At the same time, there is a failure to imagine that two people can have a deep, intense friendship without also being lovers.

George Biddlecombe [2013]: Secret letters and a missing memorandum: New light on the personal relationship between Felix Mendelssohn and Jenny Lind. Journal of the Royal Musical Association, 138 (1): 47-83.

Another response to these allegations, here.

The Skygarden Bar at 20 Fenchurch Street (aka the Walkie-Talkie Building), London. 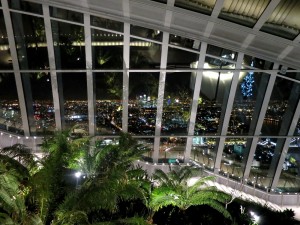 Yanis Varoufakis, Greek Minister for Finance, speaking at a press conference in Berlin on 5 February 2015:

“As finance minister in a government facing from day one emergency circumstances caused by a savage debt deflationary crisis, I feel that the German nation is the one nation in Europe that can understand us better than anyone else.
No-one understands better than the people of this land how a severely depressed economy, combined with a ritual national humiliation and unending hopelessness can hatch the serpent’s egg within its society.
When I return home tonight, I will find myself in a parliament in which the third-largest party is not a neo-Nazi party, it is a Nazi party.”

West Germany received debt relief in 1953, yet now seeks to deny it to the rest of Europe. The policies of the German government of Mrs Merkel reminds me of the British Government’s hypocrisy in the Great Depression: insisting that Australian Federal and State Governments continue to pay all interest and loans owed to British lenders, while at the same time seeking debt relief for British loans from American creditors. Every Australian economist, including no doubt the former Sydney University academic Dr Varoufakis, knows the name of Sir Otto Niemeyer, bullying representative of colonial rapacity.
Niemeyer came first in the 1906 British Civil Service entrance examination in which John Maynard Keynes came second, according to Richard Davenport-Hines’ fine new biography of Keynes.

To the late Captain Peverley, of Balmain, belongs the credit of having introduced the buffalo to Northern Australia, though he did so indirectly in a measure, when the good barque the Florence Street became a total wreck on the northern coast, not very far from where Wyndham now stands.
Captain Peverley, ship master and ship owner had, when he settled in Balmain, 28 ships of various sizes and capacities; he always boasted that not one was a “coffin ship”, and that he himself would sail on them in any sea, in any weather, and he would add as climax that he would give a first-rate rope’s ending to any of his crew, who dared to complain or say otherwise. He was a true type of the ship’s master of the old windjammer days, days when Sydney Harbour was crowded with sailing craft of all kinds, the days of the middle and late ‘fifties, when the gold fever had reached its crisis after the astonishing yields from Bendigo and Ballarat.
END_OF_DOCUMENT_TOKEN_TO_BE_REPLACED