For the record, a listing of fine art galleries and museums I have visited (AFAIR), in alpha order:

A poem by George Santayana. 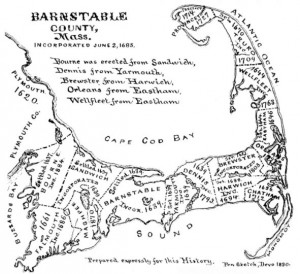 Cape Cod
The low sandy beach and the thin scrub pine,
The wide reach of bay and the long sky line,—
O, I am sick for home!
The salt, salt smell of the thick sea air,
And the smooth round stones that the ebbtides wear,—
When will the good ship come?
The wretched stumps all charred and burned,
And the deep soft rut where the cartwheel turned,—
Why is the world so old?
The lapping wave, and the broad gray sky
Where the cawing crows and the slow gulls fly,
Where are the dead untold?
The thin, slant willows by the flooded bog,
The huge stranded hulk and the floating log,
Sorrow with life began!
And among the dark pines, and along the flat shore,
O the wind, and the wind, for evermore!
What will become of man? 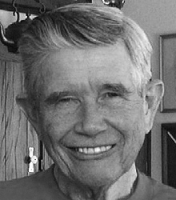 A post to remember Dan Adams (1919-2011), a retired glass industry executive I first met in Zimbabwe when he was consulting for ZimGlass, through the International Executive Service Corps.   He grew up on an apple form in Ohio, and his obituary appeared in the Toledo Blade (2011-09-20), excerpted below:

Dan Boyd ADAMS (1919-08-21   –  2011-09-17)
Dan was born in Beaver Falls, Pennsylvania to Charles and Jessie (Boyd) Adams and grew up in New Waterford, Ohio on an apple orchard farm, Adam’s Apples, owned by his parents.  He graduated from Ohio State University (OSU) with a degree in economics in 1941 and was a member of Tau Kappa Epsilon fraternity and played on the polo team for OSU.
He began working for Owens-Illinois (O-I) in 1941 as a chief industrial engineer and became Senior Industrial Engineer in 1947.  He later became plant manager in Clarion, Pennsylvania in 1956 and Huntington, West Virginia in 1957.  He later was assistant plant manager in Bridgeton, New Jersey before transferring to O-I headquarters in Toledo, Ohio where he rose to the position of Vice-President for Domestic Operations until his retirement in 1982.
On May 9, 1953, Dan was married to Mary Calista Newhard in Bucyrus, Ohio. They lived in Pennsylvania, Ohio, West Virginia, New Jersey, and England before retiring to Payson, Arizona in 1983.   In retirement, Dan remained active with the Payson Packers hiking club and the Republican Club as well as being active in contacting elected officials on issues of concern, particularly natural resource management and economics.
He also was a volunteer with the International Executive Service Corps (IESC), a not for profit organization of American business people who provide managerial and technical assistance to private enterprises in developing countries.  He and Mary traveled extensively, helping in countries such as Zimbabwe, Zambia, Honduras, Russia, Poland, Egypt, and Pakistan.
He wrote for local papers including the Backbone and the Payson Roundup. Dan is preceded in death by his brothers, Boyd “Doc” and Frank, and his son, Michael.  Dan is survived by his wife, Mary; his children, Tony, Eve and Ann, and his sisters, Ginna and Elizabeth, and grandsons, Ben and Jesse.  In lieu of gifts or flowers, his family suggests that in remembrance of Dan to write or call one of your elected officials about a political issue that concerns you. 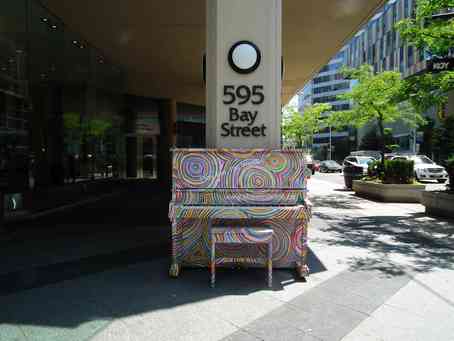 The City of London Festival’s piano-planting project in the Victoria Embankment Gardens, June 2012: 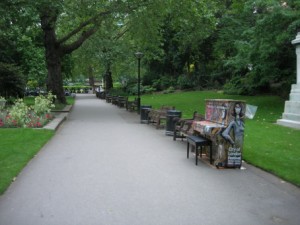 While on the subject of Britain’s early lead in computing, I should mention the recent death of Ernest Kaye (1922-2012).  Kaye was the last surviving member of the design team of the LEO computer, the pioneering business and accounting machine developed by the Lyons Tea Shop chain in the early 1950s.  As with jet aircraft, computers were another technological lead gained and squandered by British companies.
Kaye’s Guardian obituary is here.   A post on his LEO colleague John Aris is here.  An index to Vukutu posts on the Matherati is here.

A 1951 article about the Manchester computer, reprinted in The Guardian today.

To think of two twelve-figure numbers and write them down and then to multiply them together would involve considerable mental effort for many people, and could scarcely be done in much under a quarter of an hour. A machine will be officially “opened” at Manchester University on Monday which does this sort of calculation 320 times a second. Provisionally named “Madam” – from the initials of Manchester Automatic Digital Machine and because of certain unpredictable tendencies – it is a high-speed electronic computer built for the University Mathematics Department, and paid for by a Government grant. It is an improved version of a prototype developed by Professor F. C. Newman and Dr. T. Kilburn of the Electrical Engineering Department, and Professor M. A. Newman and Mr. A. Turing, of the Mathematics Department.
The practical applications of the machine are great and varied, and it is, of course, of greatest use where long, repetitive calculations are involved, some of which would probably be impossible without its aid.  There are also commercial possibilities as yet unexplored relating to accountancy and wage departments. It is significant that one of the largest catering firms in the country has recently installed a similar machine, which may replace the work of hundreds of clerks. Will it perhaps solve the problems of redundancy it may create? Large-scale private or national statistics can be prepared in a far more up-to-date form, in some cases in a matter of weeks rather than years. Finally, of course, there are such sidelines as teaching the machine to play chess or bridge.
There are two features that might be mentioned: the magnetic drum for storing permanent information and the cathode-ray tubes for storing information produced in the course of a calculation. These have added immensely to the “memory” of such machines. The magnetic drum will hold 650,000 binary digits and each of the eight cathode-tubes sixty-four twenty-digit numbers. It will add up 500 numbers before you could say “addition”, and it could work out in half a day the logarithmic tables which took Napier and Briggs almost a lifetime.
It is an alarming machine, in fact. A tool like a plough is friendly and intelligible, but this reduction to absurdity of mental arithmetic is another matter. Those associated with the machine stress that what it can do depends on the “programme” fed to it. Nobody knows what Manchester’s machine will be able to do, and Mr. Turing said to-day that, although it will be used on problems of pure mathematics, the main idea is to investigate the possibilities and theory of such machines.  In an article in “Mind” six months ago, Mr. Turing seemed to come to the conclusion that eventually digital computers would be able to do something akin to “thinking” and also discussed the possibilities of educating a “child-machine.”  One feels that whatever “Madam” can do she will do it for Mr. Turing.

The government grant mentioned in paragraph 1 was awarded to the pure mathematician Max Newman because of his secret cryptographic work at Bletchley Park during WW II.   Because of that work, he knew Turing and his capabilities very well, and recruited him to Manchester to work on the project.   It is interesting that even in a newspaper article published in 1951 mention was made of machines playing chess.
An earlier post on long-lived memories of Alan Turing is here.  Some information about Turing’s death is here, including his mother’s theory that his death by poison was accidental, occurring while he attempted to silver-plate a spoon.