Sonnet III
O world, thou choosest not the better part!
It is not wisdom to be only wise,
And on the inward vision close the eyes,
But it is wisdom to believe the heart.
Columbus found a world, and had no chart,
Save one that faith deciphered in the skies;
To trust the soul’s invincible surmise
Was all his science and his only art.
Our knowledge is a torch of smoky pine
That lights the pathway but one step ahead
Across a void of mystery and dread.
Bid, then, the tender light of faith to shine
By which alone the mortal heart is led
Unto the thinking of the thought divine.

Philosopher John Gray has a review in the LRB of Akerlof and Shiller’s new book on the errors of mainstream economics, a review which mentions the sadly-neglected economist George Shackle.  Shackle, unlike most academic economists, actually worked in industry and Government and had made investment decisions, and knew whereof he wrote.

If Akerlof and Shiller’s grip on the history of economic thought is shaky, they also fail to grasp why Keynes rejected the idea that markets are self-stabilising. Throughout Animal Spirits they portray him as reintegrating psychology with economic theory. No doubt this was one of Keynes’s goals, but it is not his most fundamental revision of economic orthodoxy. Among his other accomplishments he was the author of A Treatise on Probability (1921), in which he tried to develop a theory of ‘rational degrees of belief’. By his own account he failed, and in his canonical General Theory of Employment, Interest and Money (1936) he concluded that there was no way anyone could make forecasts. Future interest rates and prices, new inventions and the likelihood of a European war cannot be predicted: there is no ‘basis on which to form any calculable probability whatever. We simply do not know!’ For Keynes, markets are unstable less because they are driven by emotion than because the future is unknowable. To suggest that the source of market volatility is unreason is to imply that if people were fully rational markets could be stable. But even if people were affectless calculating machines they would still be ignorant of the future, and markets would still be volatile. The root cause of market instability is the insuperable limitation of human knowledge.
END_OF_DOCUMENT_TOKEN_TO_BE_REPLACED 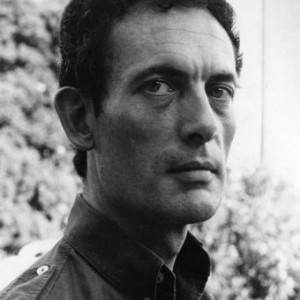 Australian composer Richard Meale (1932-2009, pictured in 1972) has just died at the age of 77.   He was perhaps Australia’s best expressionist, especially in moving early works such as Homage to Garcia Lorca, and Clouds Now And Then.   In his later years, like so many 20th-century Australian  modernist composers, he turned to writing late-romantic tosh, as if the only function of composers was to support the film industry.  In honour of his memory, I repeat the profound Basho haiku which he quoted on the score of Clouds Now And Then:

Clouds now and then,
Giving men relief
From moon-viewing.

SOME LINKS:
The SMH obituary is here.  An account of his funeral is here and reminiscences by composers David Worrall and Ross Edwards are here.    Andrew Ford’s eulogy is here.  A review of a memorial concert held for him in February 2010 is here.
POSTCRIPT (Added 2013-02-23):  Meale visited UCLA in 1960 on a travel grant from the Ford Foundation, and there studied and played traditional Japanese and Balinese gamelan music.   I wonder if one of his teachers was Colin McPhee, who taught ethnomusicology there from 1958.  (And how cool was that:  to be teaching ethnomusicology at UCLA in the late 50s!)

As data collection is completed, processing begins. Coding, punching and some simple programming present formidable problems. Consistency checks are too much to contemplate. Funds begin to run out because the costs of this stage have been underestimated. Reports are due before data are ready. There has been an overkill in data collection; there is enough information for a dozen Ph.D. theses but no one to use it. Much of the material remains unprocessed, or if processed, unanalysed, or if analysed, not written-up, or if written-up, not read, or if read, not remembered, or if remembered, not used or acted upon. Only a minuscule proportion, if any, of the findings affect policy and they are usually a few simple totals. These totals have often been identified early on through physical counting of questionnaires or coding sheets and communicated verbally, independently of the main data processing.”

Not all knowledge consists of propositions, and not even all propositions can be written down.  It is good to see Andrew Sullivan quoting Chinese Taoist philospher Chuang Tzu to this effect.

Chaconne
The most significant fact about this room is that nothing else
exists. Beyond the walls, nothing. Outer space, perhaps, infinite
and invisible. The windows are mirrors. Why look out when one
can look in?
There is no furniture. It is more amusing to imagine new, different
fittings each day, than it would be to wake to the same shapes,
colours, textures. Today, next year,
yesterday, it is one. On a wall – or is it the floor – is a clock
I built once, or shall build, or am building. Its hands are
identical / their mute semaphore. Opposite, a pool of green,
blue, sometimes colourless liquid, sometimes reflects and
sometimes invents.
I think of this room as a filing-cabinet, a memory bank where the
history of fantasy is stored. The fantasy is history. Dreams are
sculptures, names are poems, nobody comes for there is no-one else,
and nowhere from which to come. Proust, de Vigny, Owen Aherne,
my identities are interchangeable. The mind is an entertainment,
a circus where philosophers perform. I inhabit the drawing room
Rimbaud imagined at the
bottom of a lake, purple tincture of opium. And identical self
represents me on the previous planet, they will not
notice I have gone. It is difficult sometimes
for me to remember that I too am imaginary. The world has
neither ended nor begun / creativity and hallucination /
perhaps a huge joke gone awry,
a lysergic acid rave, Robinson Crusoe on the wrong island.
But still an island, bounded by seas I shall never sail.
Solitudes. Pacing impatiently
the cage of body, of self. An exit glitters brightly in my hand.

Further to my post about different ways of knowing and recent posts on religion, is this statement from a story in the The Melbourne Age today, about Indigenous Australian footballers:

In her book Yuendumu Everyday, Yashmine Musharbash refers to the Aboriginal notion that knowledge is acquired through ”doing” rather than questions.”

Today a poem by Kath Walker, aka Oodgeroo Noonuccal, (1920-1993), Australian poet and civil rights activist, and someone my grandmother knew.  Ms Walker was the first person of Australian Aboriginal descent to publish a book of poetry.

Song
Life is ours in vain
Lacking love, which never
Counts the loss or gain.
But remember, ever
Love is linked with pain.
Light and sister shade
Shape each mortal morrow
Seek not to evade
Love’s companion Sorrow,
And be not dismayed.
Grief is not in vain
It’s for our completeness
If the fates ordain
Love to bring life sweetness,
Welcome too its pain.

Alerted by Norm, I find myself reading Richard Norman’s defence of the new atheism here.  This topic is not new territory for Vukutu, as seen here and here.  There is little point in repeating my prior arguments, but something in Richard Norman’s argument requires a response, since (like so much of the new atheism) it seems to derive from ignorance of religious practice:

Of course it’s true that a religious community is not a debating society, and a religious service, with its prayers and hymns and rituals, is not an academic seminar whose business is to assess and defend theories. But the key phrase in the passage from Cornwell is “only partly”. The asserting of beliefs may not be the main preoccupation of religious activities, but it is still essential. Without the beliefs, the practices make no sense. Prayer is meaningless without a belief of some kind, however vague, that there is someone, a person, who is being addressed. Hymns of praise and adoration are meaningless without some kind of belief in a deity who is worthy of adoration. And there is accordingly no evading the question of whether these beliefs are true.”

Norman is profoundly wrong here.  When he says, “Without the beliefs, the practices make no sense,” he means, “Without the beliefs, the practices make no sense to someone wedded to the idea that actions have to be informed by prior beliefs.”    Most prayers of most people may have the syntax (the external form) of supplications, but that is usually not why most people pray most of the time.  If that were so, then why would intelligent, rational people keep on praying in the face of the repeated failure of their supplications?    Only a literalist (and, my goodness, aren’t there are lot of those among the nouveau atheists!) would imagine that the syntax of an utterance represents the full extent of its possible meanings or uses.   Indeed, one could view the last six decades of research in the philosophy of language as seeking to refute just this single idea.
Rather, most people who pray or chant or sing hymns or attend church do so in order to commune with what they consider to be (or which might be) a non-material realm, the divine.  In particular, people can feel drawn to interactions with such a realm (in the form of prayers or meditation, or through the reading of scriptures, or by attendance at religious ceremonies, etc) for reasons or motivations or experiences that they themselves do not fully understand or that they cannot even put into words.    It is possible, but not becoming, to mock these motivations, as Norm does here.  But mockery, although historically the standard  approach of scientists faced with phenomena they can’t yet explain (from magnetism to meteors to new planets), does not make the underlying experiences any less real nor the evidence any less compelling for those who have had the experiences or felt the motivations.
As I have said before (and many have said before me), belief can be what comes after one practices spiritual activities long enough, not necessarily what leads one to practice them.   I suppose it can be great shock to a professor of moral philosophy that intelligent people may act without first having a well-grounded belief to justify their actions, but that is what most of us have done, in most cultures, most of the time, for most of human history.  It is surely ironic that the new atheists attacking religious ideas and practices should be so firmly in the grasp of a meme – that beliefs necessarily precede and inform actions – whose origins are in the Confessing Protestant ideas of the Christian Reformation, and one which is historically and culturally an aberration, even within Christianity.
POSTSCRIPT (2009-11-14):  Norm has responded to this post, here, and Martin commented here.    And here are my views on the meaning of rituals and religious practices.

Last night, I caught a new Australian play derived from the life of logician Kurt Godel, called Incompleteness.  The play is by playwright Steven Schiller and actor Steven Phillips, and was peformed at Melbourne’s famous experimental theatrespace, La Mama, in Carlton. Both script and performance were superb:  Congratulations to both playwright and actor, and to all involved in the production.
Godel was famous for having kept every piece of paper he’d ever encountered, and the set design (pictured here) included many file storage boxes.  Some of these were arranged in a checkerboard pattern on the floor, with gaps between them.  As the Godel character (Phillips) tried to prove something, he took successive steps along diagonal and zigzag paths through this pattern, sometimes retracing his steps when potential chains of reasoning did not succeed.   This was the best artistic representation I have seen of the process of attempting to do mathematical proof:  Imre Lakatos’ philosophy of mathematics made theatrical flesh.
The photograph of the La Mama billboard is from Paola’s site. 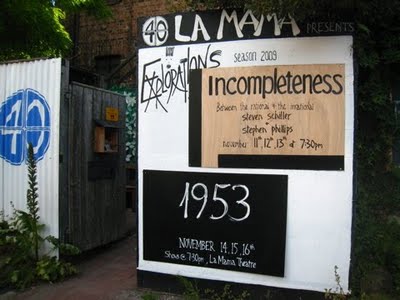