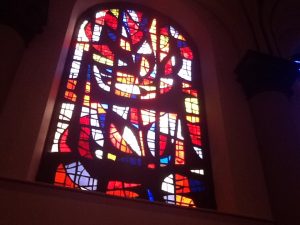 Several newspapers have recently carried reviews of a new book presented short biographies of 8 female composers (Beer 2016).  It is certainly true that female composers have suffered from misogyny, and probably still do. But the situation is more subtle than it may appear at first.  The discrimination may arise because composers such as Fanny Hensel (neé Mendelssohn) wrote mostly for small-scale, intimate forms, such as lieder and solo piano.  Hensel wrote no operas or concertos or symphonies, as far as I know.   Since the industrial revolution our society, one could argue, has favoured the grand and the grandiose, so anyone who writes only in small forms is ignored.   This is true even of male composers:  Hugo Wolf, who wrote art song, is unjustly overlooked, for instance.   (This bias for the big and bombastic could also be a strongly male one.)  Against this argument that composers need to go large or be ignored, one could cite the case of nineteenth century French composer Louise Farrenc (pictured), who wrote symphonies and full-length chamber works (indeed, very good ones), yet still was ignored by the musical establishment.  Despite her music being as good as Schumann’s or Mendelssohn’s, she still is ignored.  Even Beer does not, apparently, profile her.
Hensel’s brother, Felix, was a symphonist and composer of overtures who audibly honed his technical craft writing a dozen string symphonies for the pick-up orchestra his mother assembled for the family’s weekly salon concerts each Sunday afternoon in Berlin.  Very few women composers have had such an advantage, which perhaps explains something of Felix Mendelssohn’s comparative abilities.   But Fanny Mendelssohn certainly had access to this resource.  What explains her failure to write for it? Was it some pressure in the family, or just in herself?  Did their parents, perhaps unconsciously and subtly, expect Felix to write pieces for the family salons, but not expect Fanny to do so? Was it a matter of social and class expectations of gender roles which the family had internalised? Or was Fanny simply lacking in confidence?   She once wrote a song to secretly communicate her love for the man who later became her husband at a time when her parents refused to allow the pair to meet or write letters, so it seems she could disobey the spirit of any explicit family imposition, if not the letter.
Or are we looking in the wrong place entirely here?  The Mendelssohns’ father and his brothers were bankers.  Felix’s father took him to Paris as a teenager to meet Cherubini explicitly to assess whether the boy had a future as a composer.  It is easy to imagine that his father wanted him to follow in the family bank, so perhaps Felix had to fight to get to be a composer. It was not, perhaps, that the family discouraged Fanny in particular from a career as a composer but that both children were thus discouraged, but only Felix resisted this pressure.  To be honest, however, Felix’s published letters do not reveal any such discouragement from their parents.
Reference:
Anna Beer [2016]: Sounds and Sweet Airs: The Forgotten Women of Classical Music. Oneworld, London, auK.

For as long as I can remember, I have had to endure lectures from men in uniforms – policemen, soldiers, teachers, clerics – about courage and honour.  I recall a particular egregious lecture from a cleric on the cowardice of men who had long hair. (For next millennium readers, this was part of a larger argument accusing anyone not supporting US and Australian involvement in the second Indo-Chinese war of cowardice.  Of course, it required great courage for a 17-year-old conscript to openly confront such logically specious, and morally tendentious, nonsense.)   The forces of conservatism always accuse those who confront them of cowardice, it seems.
The Hillsborough coronial verdict shows just what true courage and valour and honour are:  It is fighting for justice against all odds, against the overwhelming sentiment of those in authority and of society in general, against friend and peer, as well as journalist and foe, against recalcitrant judges and lying policemen.  But courage is also admitting when one has made a poor decision, and bravely facing the consequences of that decision.  It is not too late for these men in uniform to finally reveal some courage and accept the consequences of their negligence, their lack of preparation, and their poor judgment.

After the coup in Chile in 1973 which overthrew the democratically-elected administration of Salvador Allende (and which killed him and many others), the Eurocommunist left in Western Europe spoke of the need to have a grand “historic compromise” before entering Government: enjoining the centre and centre-right to support a coalition of national unity, so as to preclude, or at least inhibit, the right from undermining an elected government of the left.  One of the ironies of history was that it was the left in government – the communist regimes of Eastern Europe – which were forced to forge such grand compromises, by conducting negotiations and sometimes forming coalitions (albeit, short-lived) with their non-communist opponents in Poland, Hungary, Czechoslovakia, Bulgaria, and even Zimbabwe.