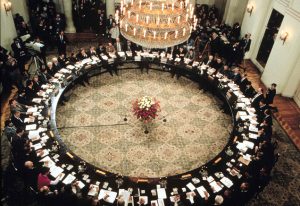 After the coup in Chile in 1973 which overthrew the democratically-elected administration of Salvador Allende (and which killed him and many others), the Eurocommunist left in Western Europe spoke of the need to have a grand “historic compromise” before entering Government: enjoining the centre and centre-right to support a coalition of national unity, so as to preclude, or at least inhibit, the right from undermining an elected government of the left.  One of the ironies of history was that it was the left in government – the communist regimes of Eastern Europe – which were forced to forge such grand compromises, by conducting negotiations and sometimes forming coalitions (albeit, short-lived) with their non-communist opponents in Poland, Hungary, Czechoslovakia, Bulgaria, and even Zimbabwe.