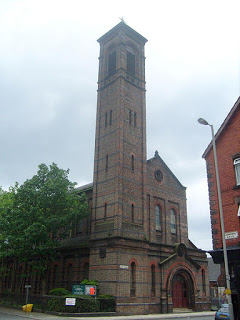 Some buildings and spaces provide pleasure to the eye and heart, and an inexplicable lift to the spirits.   One such place is Frank Lloyd Wright’s Unity Temple in Chicago, whose intimacy and proportions are ineffably balanced.  Another is the Italianate Church of St Brigid in Wavertree, Liverpool.  This Anglican church was designed by E. A. (Arthur) Heffer and built between 1868 and 1872.    The building can be clearly seen from the inter-city trains approaching and departing Liverpool’s Lime Street station, and seeing it never fails to lift my spirits.
Perhaps the pleasure arises from the stark contrast between the tall bell tower and the flat, surrounding landscape of  two-story Victorian terraces.  Or perhaps it is the shape and size of the tower; certainly, the visual pleasure would be much less if the tower were pyramid-shaped, or conical, or any shorter.

I have been arguing the flaws and foibles of the wench known as mainstream economics for some time.   Now the Grauniad has an editorial arguing likewise (title and links below as per the original):

It was, of all people, Elizabeth Windsor who laid the charge most forcefully. Opening a new building at the LSE, weeks after Lehman Brothers imploded, she asked one of the dons why no one had seen the meltdown coming. In the years since, it has often seemed as if students are more serious than their lecturers about pursuing the monarch’s concern.
Undergraduates at Sheffield and Cambridge have set out to rattle the foundation stones of their discipline. In Manchester, they went further, organising the Post-Crash Economics Society and securing more eclectic instruction, through a new Bubbles, Panics and Crashes module. Covering the former Fed boss, Ben Bernanke, as well as the interwar Marxist, Kalecki, the course was not reducible to right or left. It offered something closer to economics as understood in Keynes’s Cambridge. Manchester, however, has now declined to accredit the course, and instead opted to pull the plug.
There are, of course, outstanding scholars within the economics mainstream. Its pre-eminent theorist, Kenneth Arrow, wrote for the Guardian within weeks of the crisis that the discourse he helped develop – about finance improving the distribution of risk – had become increasingly vulnerable to rival analysis, which emphasised how markets go awry where buyers and sellers have different information. The roots of that evolution go back to the 1970s, but it has picked up since 2008. The mainstream can also fairly point out that “non-linear” phenomena, such as bubbles and panics, are inherently hard to predict, which half-answers the Queen’s question.
The awkward thing, however, is that there were those who spotted at least the possibility of trouble on the horizon; it is just that they were rarely mainstream economists. Several journalists were asking sharper questions than academics. To take one example, the FT’s Gillian Tett, who has a background in anthropology rather than economics, asked where the frenzied debt dance would end. A grasp of the human propensity for herding is more useful in getting a handle on bubbles and crashes than any postulations about the individualistic calculations of rational economic man.
The failure to spot the crisis raised wider questions about the discipline’s usefulness. It can shelter behind unavoidable ambiguities regarding the price of both labour and capital. Will workers respond to income tax cuts by striving for the extra earnings they can now keep or by skiving, on the basis that they can now afford to take more time off? Do high interest rates induce savers to scrimp or encourage them to go out and blow their extra return? No one can say without interrogating the data – which good economists do try to do. But hopes of clear answers are retarded by departments that treat the subject as a branch of applied mathematics, and by practitioners less concerned with the insight than the arithmetical tractability of their models.
These shortcomings go back to “the marginal revolution”, which jettisoned the dynamic, sweeping preoccupations of 19th century classical political economy in favour of a narrower but more precise concern with movements between market equilibrium. But the big questions that concerned Mill, Marx and Smith are now rearing their heads afresh.
Michael Sandel’s What Money Can’t Buy unearthed the hidden moral assumptions of all the theory. Daniel Kahneman spent his career exploring how the way economic choices are conceived affects what decisions are made, but these days he can pack out Westminster Hall by speaking about his conclusions. Now Thomas Piketty – who spent long years, during which the mainstream neglected inequality, mapping the distribution of income – is making waves with Capital in the 21st Century. Nodding at Marx, that title helps explain the attention, but his decidedly classical emphasis on historical dynamics in determining who gets what resonates in a world where an increasing proportion of citizens are feeling fleeced by the elite. The tide of intellectual history is on the side of Manchester’s students.”

The actor Richard Burton famously played Hamlet at the Old Vic in 1953.    The following story is from a profile of Burton written by journalist John McPhee in 1963 for Time Magazine, and recounted in the current New Yorker  (“Elicitation”, 7 April 2014, p.57):

He [Burton] had completed about 60 performances and the box office was beginning to slide when the house manager came to his dressing room one evening and said, “Be especially good tonight.  The old man’s out front.”
“What old man?”
“He comes once a year,” said the house manager. “He stays for one act and he leaves.”
“For God’s sake, what old man?”
“Churchill.”
As Burton spoke his first line – “A little more than kin, and less than kind” – he was startled to hear deep identical mutterings from the front row.  Churchill continued to follow him line for line, a dramaturgical beagle, his face a thunderhead when something had been cut.  “I tried to shake him off,” remembers Burton.  “I went fast and I went slow, but he was right there.”  Churchill was right there to the end, in fact, when Burton took 18 curtain calls and Churchill told a reporter that “it was as exciting and virile a performance of Hamlet as I can remember.”  Years later, when Winston Churchill – The Valiant Years was under preparation for television, its producers asked Sir Winston who he thought should do the voice of Churchill.  “Get that boy from the Old Vic,” said the old man.
They got that boy from the Old Vic.