LondonJazz has a review of Rhythmica’s recent concert at the QEH here.  And links to some videos are here on Rhythmica’s pages.  Be delighted, be very delighted!
Next concert on the Rhythmica Wake-up-the-Nation tour is in Cambridge on 13 March 2011 at  Clare Jazz, Clare Cellars, Memorial Court,  Queen’s Road, Cambridge CB3 9AJ.

Another superb gig from Rhythmica, this time in the Cafe of Foyle’s Bookshop in London.   After last weekend’s wake-up call in Southport, tonight’s gig was at a more civilized hour.   But the pace and the musical skill and the serious intent were just the same – anyone expecting easy-listening, cocktail-bar music was in for a shock!
With about 75 people present, it was standing room only.    Standing at the back, I found Peter Edwards’ piano hard to hear – maybe it was not amplified, or not sufficiently.   I enjoyed again bass Peter Randall’s solo in Parallel, a solo which seemed to have more coherence tonight, or perhaps I understood the motifs and their development better this time round.   Andy Chapman on drums provided solid support for the odd time signatures, and I noticed again the frequent rhythmic coupling and tripling he did with Randall’s bass and Edwards’ piano.
I was also impressed by Mark Crown’s superfast bop trumpet solo on Herbie Hancock’s The Sorcerer. But the man of the match tonight was undoubtedly stand-in tenor sax player, Binker Golding, whose blistering, vein-popping solo on the same number had the audience up in a standing ovation when he ended.    Even the two Dutch women near me who talked through the entire set were quiet for this, although they still didn’t look at the stage.
As best I recall, the order of songs was: 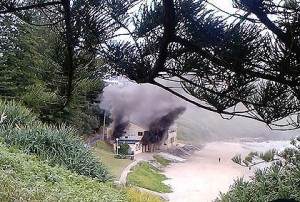 And here is a web-cam for Yamba beach:
Yamba web-cam

They fall into three categories:  the witty, the stirring, and the vast majority.”

Pash is now an attorney in LA, and O’Shaughnessy Professor of Communication at Queen Mary, University of London. Ewan Sutherland, a participant from Glasgow and now a telecommunications consultant, has a short report of the Debating Festival here.
Following the Festival, the student newspaper of the Australian National University (ANU), Canberra, Woroni, reported on a visit to ANU by the Oxford University Union Debating Team (issue of 1 August 1978).   This report (with obvious typing errors corrected, one ellipsis added, and one misplaced line – shown by [ ] – re-inserted appropriately) is here:

Complete with jokes generously supplied by the FitWilliam [sic] Museum of Antiquities in Cambridge, the  Oxford University Union Debating Team visited Canberra for four days at the beginning of second semester.  The team was in Australia along with teams from Cambridge, Glasgow, Harvard, Columbia, Oregon, Auckland, Canterbury and several Australian universities including ANU for the first Honeywell International Inter-varsity Debating Festival in Sydney.
Despite the fact that all four members of the team are part of Margaret Thatcher’s shock troops (she was described by one of them as Attila the Hen), they were almost human.  Nicholas O’Shaughnessy wants to be Viceroy of India and developed an accent to match.  John Harrison . . . found solace in the company of Greg Carman.  Marie-Louise Rossi replaced at 4 hours notice a past president of the Oxford Union, Vivienne Dinham.  Mark Sterling, in between drams, managed to defeat the cream sherry of ANU Law School mooting talent, Tom Faunce and Lee Aitken.
There were two debates in Canberra.  The first, on 19th July, was against ANU, ably represented by Andrew Byrnes, Steve Bartos and Vivienne Bath.  The subject was ‘That Only God can Save the Queen‘, which Oxford negated.  By any standards it was a good piece of comedy, though not perhaps describable as a debate.  Oxford were rather the worse for wear, having staggered off a plane from North Queensland just 1.5 hours before the debate began.
On 20th July there was a highly successful debate in the Albert Hall against a team from parliament.   It proved very difficult to get any MPs at all.  Most of the  ALP were overseas on their compulsory annual junkets.  Many Liberals were [  ] discreetly elsewhere on the date of the debate.  No member of the National Party could be found who could string more than about three words together before collapsing in in exhaustion.  In the end we found Michael Baume, Jim Carlton and Michael Hodgman, who turned on a very entertaining performance.  They admirably proved that talent is in inverse proportion to one’s chances of becoming a minister.
On July 21 the Law School staged a moot and lost.  Oxford left for Melbourne on July 22, having only managed [to see Canberra  in the wet.  Every time] that a trip was planned, the heavens opened.
On a marginally more serious  note, the success of the Oxford visit has prompted the Union to try and re-establish Union Night Debates on a regular weekly basis.  These debates are an established and popular feature of many English and Australian universities, and were common here until a few years ago.  If anyone wants to help on the Union Debates Committee, go and talk to someone in the Union Office.

The article was accompanied by a photo of the 19 July debate participants, showing seated (left-to-right) under a portrait of the Queen and a British and an Australian flag: John Harrison, Marie-Louise Rossi (1956-2014), Nicholas O’Shaughnessy, Greg Carman (MC), Vivienne Bath, Steven Bartos and Andrew Byrnes. I attended the debate on 19 July 1978. 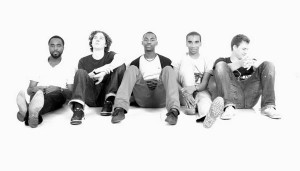 Earlier today I caught a rainy, late morning gig by Rhythmica as part of the Southport Jazz on a Winter’s Weekend Festival.  The quintet comprises Mark Crown on trumpet, Peter Edwards piano, Peter Randall double bass, Andy Chapman drums, and Zem Audu on sax.  Audu was absent today, his place taken by Binker Golding on tenor sax.   There were perhaps 150 people in the audience, with only a handful looking younger than 50.   Maybe everyone younger was still asleep.
What a way to wake up!  From the first three bars of the first number – Time Machine – you knew these guys were serious – they were people to be reckoned with.  The piece was in 11/4 (or perhaps one bar in 3 beats to every two bars in 4), and they were extremely together!  Piano and bass were in close unison for an ostinato bass line, trumpet and tenor sax together in similar unison for the melody.    And everyone – all 5 – in very tight formation.    The close co-ordination was evident throughout the morning, with the players grouping mostly as for Time Machine.
The use of trumpet and sax together, sometimes in unison, sometimes playing seconds and thirds (especially at the ends of unison phrases), with the piano riffing between phrases,  as if commenting from the sidelines on the melody, is a feature of Wynton Marsalis’ compositions, and before him, of Wayne Shorter and others in the early 60s.   This produces what I find is a very attractive sound, and Rhythmica did it very well.  Anthem was in this vein.   Sometimes also the bass and drums would double (as in Mr JJ), and just once we also heard trumpet, sax and piano play unison/thirds choruses together, in the aptly named Triple Threat.   And for the final chorus of Solace, Crown’s trumpet played long-held falling fifths underneath everyone else’s bop gyrations; these were just sublime.
In a lineup of excellent performers, the standout for me was bass player Peter Randall – he was fast, agile, and with lots of interesting walking lines – and using all five fingers to stop strings in the high registers.   But we only heard him solo once (in Parallel) –  it would be good to hear more of him.

As best I recall, the order of songs was as follows:
Set 1:

The last number was a great New Orleans stomp written by Binker Golding, which the crowd loved – perhaps showing their real preference would have been for something more traditional.   Myself, I was happier with what came before.  Counting 11 to the bar certainly woke me up PDQ!
Photos (and credits): Rhythmica (Rhythmica) and Peter Randall (Ben Amure).
UPDATE (2011-02-06): I have now listened to their debut CD.  Confirms my view that these guys are not people you’d want to mess with.  They have some serious intent and the strong musical skills to achieve it.  This is great music.
UPDATE #2 (2011-02-08): The band’s next outing is in a bookshop!   First, pre-dawn Saturday morning gigs, then playing  in libraries!  What next?  An appearance on The Archers?  Or music to accompany a TV cooking program? 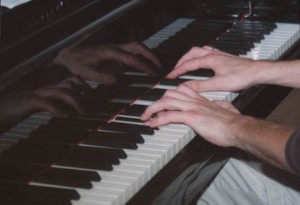