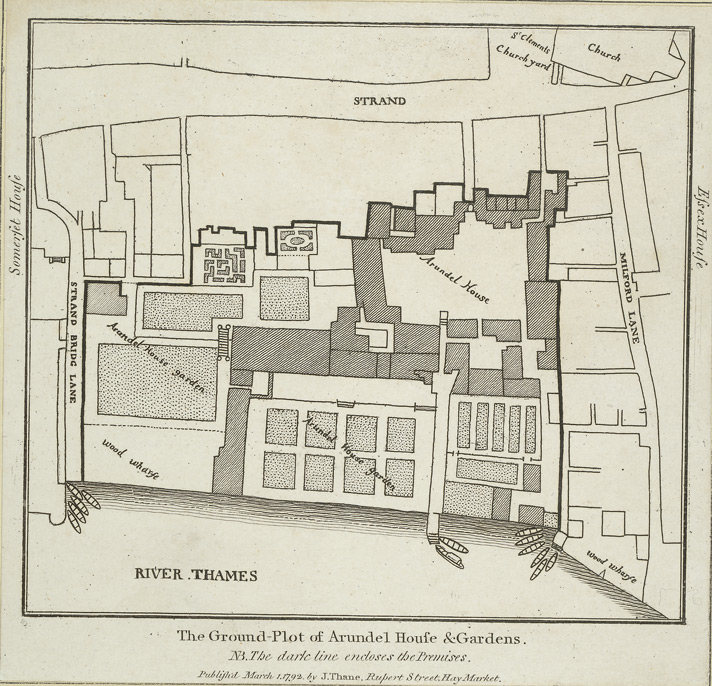 I have written before about Robert Southwell SJ, poet, martyr and Shakespeare’s cousin, and quoted some of his poems.  Southwell (c. 1561-1595) was an English Jesuit from an aristocratic family, whose mother had been a governess and friend of Queen Elizabeth I.  He left England illegally to study for the priesthood and returned — again illegally — to live and minister in secret to England’s oppressed Catholic population.  He was captured, tortured by Elizabeth’s sadistic religious police, subjected to a show trial, and publicly executed.
Southwell was a poet of fine sensitivity, and drew on his Jesuit spiritual training to become the first English poet to develop personation (or subjectivity), a psychologically-real description of the interior self.   His cousin Will Shakespeare was to adopt this idea in his poetry and plays, so that (for example) we learn about Hamlet’s internal mental deliberations, not only about his public actions and conversations.  The late Anne Sweeney argued that Southwell developed personation in his poetry as a direct result of completing the Spiritual Exercises of St. Ignatius Lopez of Loyala, a process of meditation and self-reflection which all Jesuits undertake. In her words (p. 80):

The core experience of the Ignatian Exercises was the reading and learning of the hidden self, the exercisant learning to define his reponses according to a Christian morality that would then moderate his behaviour. After a powerfully imagined involvement in, say, Christ’s birth, he was required to withdraw the mind’s eye from the scene before him and redirect it into himself to analyse with care the feelings thereby aroused.”

It would be interesting to know if Ignatius himself drew on literary models from (eg) Basque, Catalan or Spanish in devising the Exercises.

Living underground and on the run, Southwell wrote poetry for a community unable to obtain prayer books or to easily hear preachers;  poetry was thus a substitute for sermons and for personal spiritual counselling, and a form of prayer and spiritual meditation.  His poetry is also strongly visual.
Because the Jesuit mission to England during Elizabeth’s reign was forced underground it is not surprising that Jesuit priests mostly lived in the homes of rich or noble Catholics, or Catholic sympathizers, sometimes hidden in secret chambers.    It is more surprising that there were still English nobles willing to risk everything (their wealth, their titles, their freedom, their homeland, their lives) to hide these priests.   One such family was that of Philip Howard, the 20th Earl of Arundel (1557-1595), who was 10 years a prisoner of Elizabeth I, refusing to recant Catholicism, and who died in prison without ever meeting his own son.   Howard’s wife, Anne Dacre (1557-1630), was also a staunch Catholic.  The earldom of Arundel is the oldest extant earldom in the English peerage, dating from 1138.
The Howard’s London house on the Thames was one of the noble houses which sheltered Robert Southwell for several years.    The location of their home, between the present-day Australian High Commission and Temple Tube station,  is commemorated in the names of streets and buildings in the area:  Arundel Street, Surrey Street, Maltravers Street (all names associated with the Arundel family), Arundel House, Arundel Great Court Building, the former Swissotel Howard Hotel, and the former Norfolk Hotel (now the Norfolk Building in King’s College London) in Surrey Street.    Maltravers Street is currently the location for a nightly mobile soup kitchen.   Of course, in Elizabethan times the Thames was wider here, the Embankment only being built in the 19th century.   One can still find steps in some of the side streets leading to the Thames descending at the edge where the previous riverbank used to be, for instance on Milford Lane.
Southwell also, it seems, spent time in the London house of his cousin Henry Wriothesley, 3rd Earl of Southampton (1573-1624), who was also Shakespeare’s patron and cousin.    Southampton’s house then was a short walk away, in modern-day Chancery Lane, on the east side of Lincoln’s Inn fields.   Southampton was part of the rebellion of Robert Deveraux, 2nd Earl of Essex (1565-1601) against Elizabeth in February 1601. The London house of Essex was also along the Thames, downstream and adjacent to that of the Howard family.  The street names there also recall this history:  Essex Street, Devereaux Court.
Supporters of Essex, chiefly brothers of Henry Percy, 9th Earl of Northumberland (1564-1632), paid for a performance of Shakespeare’s play, Richard II, the evening before the rebellion.   Percy was married to Dorothy Devereaux (1564-1619), sister of Robert, and was regarded as a Catholic sympathizer.  Percy also employed Thomas Harriott (1560-1621), a member of the matherati. Given the physical proximity of these noble villas, it is likely too that Southwell and Harriott met and knew each other.
And, weirdly, Essex and Norfolk are adjacent streets in the Lower East Side of Manhattan, too (close by and parallel to Orchard Street).
References:
The image is Shown a plan of Arundel House, the London home of the Earls of Arundel, as it was in 1792 (from the British Library).  The church shown in the upper right corner is St. Clement Danes, now the home church of the Royal Air Force.
Christopher Devlin [1956]: The Life of Robert Southwell: Poet and Martyr.  New York, NY, USA:  Farrar, Straus and Cudahy.
Robert Southwell [2007]:  Collected Poems. Edited by Peter Davidson and Anne Sweeney.  Manchester, UK:  Fyfield Books.
Anne R. Sweeney [2006]: Robert Southwell: Snow in Arcadia:  Redrawing the English Lyric Landscape 1586-1595. Manchester, UK:  Manchester University Press.

I have remarked before that whoever wrote William Shakespeare’s plays and poetry was deeply familiar with the poetry and prose of Robert Southwell SJ, and had access to Southwell’s works in manuscript form.  We know this because most of Southwell’s output was only published after his execution in 1595, and Shakespeare’s poetry shows Southwell’s influence well before this date.
Shakespeare and Southwell were cousins, and both were also cousins to Henry Wriothesley, third Earl of Southampton, Shakespeare’s patron and the likely dedicatee of the Sonnets.  John Klause, in his fine book tracing the influence of Southwell’s writing on Shakespeare’s own words, includes a family tree showing the family connections between these three Elizabethans.  I reproduce some of the tree below, copied from page 40 of Klause’s book.   Southwell’s mother, Bridget Copley, was a governess to the young Princess Elizabeth, so the connections to the royal family were close.
In addition, Southwell and Shakespeare were also connected through the Vaux and Throckmorton families (Devlin has another family tree, page 264).   And the family connection between Southwell and Wriothesley was in fact closer than Klause’s tree indicates. Southwell’s eldest brother Richard married Alice Cornwallis, a niece of Henry Wriothesley senior, second Earl of Southampton and the third Earl’s father, and Southwell’s eldest sister Elizabeth married a nephew of the same second earl, a son of Margaret Wriothesley and Michael Lister.  Thus, Robert Southwell was twice a second cousin by marriage to Henry Wriothesley junior, third Earl (Devlin tree, p. 15). 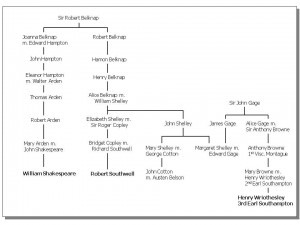 One annoying feature of the verbal commentariat is their general lack of real-world business experience.  A fine example has just been provided by political blogger Marbury, who derides Gordon Brown for not asserting himself when Prime Minister over his Cabinet Secretary on the matter of an enquiry into voicemail hacking at certain newspapers.
Well, to be fair to Gordon Brown, Marbury has clearly never led an organization and tried to force the people below him to do something they adamantly oppose doing.  No doubt, Brown when PM could have ordered the Cabinet Secretary to implement a public enquiry, but every single person in the chain of command could then have: (a) leaked the CabSec’s advice opposing the instruction, and/or (b) exercised their pocket veto to delay or prevent the enquiry happening, and/or (c) implemented it in a way which backfired upon Brown and the Cabinet. No rational manager tries to execute a policy his own staff vehemently oppose, even when, as appears to be the case here, he knows he has morality, the law, good governance, and the public interest all on his side.

A belated tribute to Bill Mansfield (1942-2011), Australian trade unionist, ACTU official and Industrial Relations Commission judge, who died earlier this year.   Elected federal secretary of the Australian Telecommunications Employees Association (ATEA), the main union of technical telecommunications staff, at a young age in 1977, Mansfield was one of a generation of Australian union leaders who were progressive, modern, reasonable, anti-Luddite, and very intelligent.    I had the good fortune to meet him and to hear him speak on several occasions, once at a seminar on the drivers and consequences of technological change;  it was clear that most managements would be out-smarted by him, and many foiled by his integrity, his willingness to engage in reasoned argument, and his integrity-of-purpose.  In the 1970s, the ATEA and its fellow communications unions ran a long-running and ultimately successful campaign seeking to get the management of Telstra (as the organization is now called) merely to have discussions with the unions about new technologies, their impacts, and their deployment; it was indicative of the belligerent stupidity of the management of the time that they sought to introduce new technologies without prior discussion with the affected workforce because management feared the workforce would be opposed.
There are tributes to him from his ACTU colleagues here and from Senator Doug Cameron here.