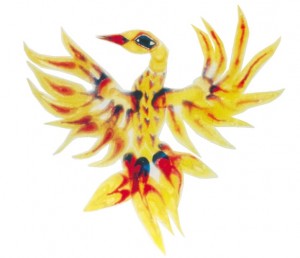 A superb concert last night in Bologna, with Orchestra Mozart and the Mahler Chamber Orchestra combining forces under young conductor Diego Matheuz.    The concert took place in Auditorium Manzoni, where I have enjoyed concerts before, sometimes under Maestro Abbado.  This hall has a relatively modern interior, almost fan-shaped, with undulating wooden walls and an undulating wooden ceiling over the stage.  The acoustic is warm, bright and fast.  The stage is only small, and barely took the forces arranged last night.   The cellos were placed in the middle, with the violas on the conductor’s immediate right, and so the sound of the violas may well have been lost.   Similarly, only the percussion and brass were (slightly) elevated, the woodwinds seated at the same level as the strings. I was close enough not to miss anything from these placements.
Prokofiev’s First Violin Concerto was played by Vadim Repin, who also played Ravel’s violin rhapsody, Tzigane.  Both pieces were fiery and technically impressive, my strong distaste for Prokofiev’s music notwithstanding.   His music strikes me as truly incoherent, using types of expression (eg, multiple simultaneous keys) and modes of musical cognition that are alien to me.  My distaste is stronger than mere dislike, being incomprehension.   The abrupt change in mood, for example, between the second and third movements, seems meant to provoke the listener, as if to say, I have the power to change your attitude to this music at a whim, and to prove it, I will now do it. Who could enjoy the company of such a person?
I have heard Repin perform before, a few years ago in Barcelona (playing the Sibelius concerto).  As on that occasion, he encored with theme and variations of Carnival of Venice, a crowd-stopping showpiece of skill and effects made famous for violinists by Pagannini and for trumpeters by Arban.   This time, however, Repin began with a fiery introduction, then detoured into several bars of accompaniment vamping before launching the theme.  The vamping allowed him to signal to the orchestral musicians what to play as they joined him, something he had tried unsuccessfully in Barcelona while himself playing the theme.
The concert also included Stravinsky’s Firebird Suite, in what was certainly the most thrilling, spine-tingling, edge-of-seat performance of this work I have ever heard.  Matheuz conducted from memory, which is not nothing for this jagged music, and his energy and enthusiasm was compelling.   The principal violinists had swapped places for this piece.   Before the interval, the principal for the Mahler CO, Gregory Ahss, was lead.   For the Stravinsky after interval, Orchestra Mozart’s principal, Raphael Christ, took over.   I was seated close enough to see them play, and both were very impressive.   Both people to watch, along with Matheuz. 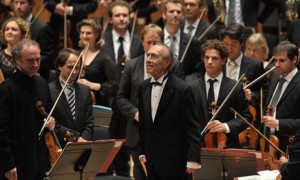 Programme:
Maurice Ravel:  Daphnis et Chloé, Suite #2.
Sergei Prokofiev: Concerto for Violin  #1 in D Major op. 19
Maurice Ravel: Tzigane, Rhapsody for violin and orchestra
Igor Stravinsky:  L’Oiseau de feu (Suite, version of 1919).
The Auditorium Manzoni is mildly fan-shaped, a shape that is not common for concert halls.  (Another example is the art deco Philharmonic Hall in Liverpool, UK, whose fan shape is much more pronounced.)  The walls around the stage and the hall, along with the ceiling over the stage have an undulating wooden veneer, which would help sound propagation in diverse directions.   The balcony overhands a large part of the auditorium, but at quite a high level, so that seats under the balcony are not “dark” in terms of the sounds they receive from the stage.
The photo shows Claudio Abbado in London in October 2011 with the Lucerne Festival Orchestra, which shares members with the ensemble seen in Bologna .  Credit:  Chris Christodoulou.

0 Responses to “Firebird in Bologna”