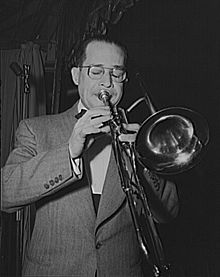 One of life’s pleasures is listening to John Schaefer’s superb radio program on WNYC, New Sounds from New York.  I have just heard his recent program presenting different versions of the jazz standard, Caravan. The song is associated with Duke Ellington, although it was composed by trombonist Juan Tizol (pictured playing a valve trombone), and the words were by Irving Mills.   Some of these versions I knew and like, particularly the ambient versions of trumpeter John Hassell:

The program also included a superb ska version which I did not know before, by the band Hepcat:

One great version not on the program is an arrangement by Gordon Jenkins. This has a fast-moving orchestral accompaniment (sounding like a walking treble), and was included in Season 1 of Mad Men.  Someone has posted a recording on Youtube here.

A superb live version I once heard by a violin-and-guitar band in Brisbane I have written about here.
Two other great ambient albums are:

Posts in this series are here.