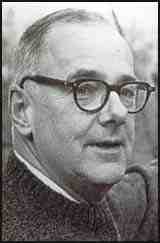 For those who know his name, Richard Bissell (1910-1994) probably has a mostly negative reputation, as the chief planner of the failed attempted invasion of Cuba at the “Bay of Pigs” in April 1961.  Put aside the fact that last-minute changes to the invasion plans (including a change of location) were forced on Bissell and CIA by the Kennedy Administration; after all, as Bissell himself argued in his memoirs, he and CIA could have and should have done more to resist these changes.  (There is another post to be written on the lessons of this episode for the making of complex decisions, a topic on which surprisingly little seems to have been published.)  Bissell ended his career as VP for Marketing and Economic Planning at United Aircraft Corporation, a post he held for a decade, although he found it unfulfilling after the excitement of his Government service.
Earlier in his career, Bissell was several times an administrative and organizational hero, a man who got things done.  During World War II, Bissell, working for the US Government’s Shipping Adjustment Board, established a comprehensive card index of every ship in the US merchant marine to the point where he could predict, within an error of 5 percent, which ships would be at which ports unloading their cargoes when, and thus available for reloading.  He did this well before multi-agent systems or even Microsoft Excel. After WW II, he was the person who successfully implemented the Marshall Plan for the Economic Recovery of Europe.  And then, after joining CIA in 1954, he successfully created and led the project to design, build, equip and deploy a high-altitude spy-plane to observe America’s enemies, the U-2 spy plane.   Bissell also led the design, development and deployment of CIA’s Corona reconnaisance satellites, and appears to have played a key role in the development of America’s national space policy before that.
Whatever one thinks of the overall mission of CIA before 1989 (and I think there is a fairly compelling argument that CIA and KGB successfully and jointly kept the cold war from becoming a hot one), one can only but admire Bissell’s managerial competence, his ability to inspire others, his courage, and his verve.  Not only was the U-2 a completely new plane (designed and built by a team led by Kelly Johnson of Lockheed, using engines from Pratt & Whitney), flying at altitudes above any ever flown before, and using a new type of fuel (developed by Shell), but the plane also had to be equipped with sophisticated camera equipment, also newly invented and manufactured (by a team led by Edwin Land of Polaroid), producing developed film in industrial quantities.  All of these components, and the pilot, needed to operate under extreme conditions (eg, high-altitudes, long-duration flights, very sensitive flying parameters, vulnerability to enemy attack).  And the overall process, from weather prediction, through deployment of the plane and pilot to their launch site, all the way to the human analyses of the resulting acres of film, had to be designed, organized, integrated and managed.
All this was done in great secrecy and very rapidly, with multiple public-sector and private-sector stakeholders involved.   Bissell achieved all this while retaining the utmost loyalty and respect from those who worked for him and with him.  I can only respond with enormous admiration for the project management and expectations management abilities, and the political, negotiation, socialization, and consensus-forging skills, that Dick Bissell must have had.  Despite what many in academia believe, these abilities are rare and intellectually-demanding, and far too few people in any organization have them.
References:
Richard M. Bissell [1996]:  Reflections of a Cold Warrior:  From Yalta to the Bay of Pigs. New Haven, CT, USA:  Yale University Press.
Norman Polnar [2001]:  Spyplane:  The U-2 History Declassified.  Osceola, WI, USA: MBI Publishing.
Evan Thomas [1995]:  The Very Best Men.  Four Who Dared:  The Early Years of the CIA.  New York City, NY, USA:  Touchstone.

0 Responses to “A salute to Dick Bissell”