In 2004, Bruce Sterling coined the term “spime” for an object which tracked its own history and its own interactions with the world (using, for example, technologies such as RFID and GPS).  In Sterling’s words, spimes

“are precisely located in space and time. They have histories. They are recorded, tracked, inventoried, and always associated with a story.
Spimes have identities, they are protagonists of a documented process.”

Spime wranglers are people willing to invest time and effort in managing the meta-data and narratives of their spimes. The always-interesting Russell Davies has been exploring the consequences of this idea for designers of commercial products. 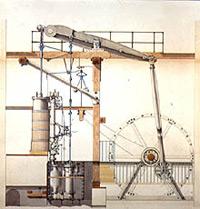 Several thoughts have occured to me:
As with all new technologies, the future is unevenly distributed, and there have been spime wranglers for some artefacts for a very long time — for instance, for early industrial manufacturing technologies (eg, the 1785 Boulton and Watt steam engine (a diagram of which is above), in use for 102 years, and then immediately shipped by an alert wrangler to a museum in Australia in 1888) and for Stradivarius violins.  The service log books of motor vehicles, legally required in most western countries, are a pre-computer version of the metadata and narrative which a spime and its wranglers can generate.
Secondly, spime wranglers, like lead-users, become co-designers and co-marketers of the product, because they help to vest the product with meaning-in-the-world.   Grant McCracken has written on the trend to greater democratization of meaning-creation in marketing.  (Note: I’ll try to find a specific post of Grant’s on this topic.)
Finally, it strikes me that the best way to conceive of the narrative and metadata generated and collated by a spime and, working with it, by the spime’s wranglers is through Rupert Sheldrake’s powerful (and sadly neglected) idea of morphic fields.   I hope to explore this idea, and its implications for quantitative marketing, in a future post.

0 Responses to “The resonance of spimes”