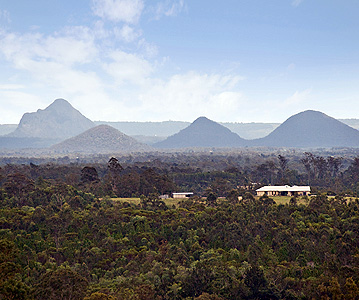 This is a post to salute Myrtle Hanley, who was a blogger avant la lettre.  She was born to a farming family in south-east Queensland early in the 20th century, the last girl in a a dozen children.   She attended Gilston State School, a tiny bush primary school in the hinterlands of the Gold Coast that had been founded in 1881 (see photo below).  At the time she attended, it was still a single-teacher school with just a handful of students;  from there, she won a highly-competitive Queensland Government scholarship to attend high school in Brisbane.   She was the first member of her family to attend high school.   Within her immediate family growing up, her nickname was “The book says so“, since she was fond of quoting books and articles she had read in arguments with her brothers and sisters.
Her father, however, resented her becoming educated, and forced her departure from high school after a year.  Her headmaster, sympathetic to her situation, found her a position as secretary and accountant to a saddlery in Brisbane.   She then commuted to Brisbane by horse and train from rural Dakabin, north of Brisbane, where her family now lived.   Daily commuting to work from the suburbs of large cities over longer than walking distances had begun in Melbourne and in Los Angeles in the 1890s, so commuting from a farm was perhaps not unusual in the 1920s.   Her parents later moved to the small beach-side settlement of Woody Point on Moreton Bay, where her mother early each morning would walk to the surf to swim, and then find and eat fresh oysters.   The photo above shows the Glass House Mountains, part of her country.

She married a dairy farmer in 1933 and they raised a family in rural northern NSW.   Life for farmers was difficult through the Great Depression and the 1940s, and finances were a constant struggle.  Despite this, she maintained a long-running subscription to a book club, reading each monthly volume as it arrived, as well as subscriptions to overseas magazines.    She was renowned among her family for staying up late on election nights to track the individual seat results as they were announced on the radio.   All her life she was devoted to crosswords, and both adept and fast at cryptic crosswords.  She wrote well, and her one surviving story reveals a fine prose stylist.
Sometime in the late 1940s she heard a radio broadcast (perhaps one of the first in Australia) playing the Top 40 best-selling records.  She thought this information needed recording for posterity, and so began a four-decades long practice of listening to a radio broadcast of the Top 40 each Saturday morning, and keeping a written record of the list in a series of school exercise books.    This is the sort of information we’d expect nowadays to be maintained by some music fan on the web (although I cannot currently find these lists anywhere on the web).  One could view this weekly activity as a form of Zen practice, with the discipline of the regular practice itself being its own reward.  Due to such sustained and close listening, she acquired an uncanny ability to recognize popular singers, particularly men, and to tell them apart.  She had had some piano lessons at school and always kept a piano in the house;  her favourite piece of music was “Sunset on the St Lawrence“, a piano waltz by Frederick Harris (aka Maxime Heller).
She knew well the story of that river:  she loved and was well-read in North American history, particularly the history of the western states.   Starting in her 60s, she decided to record her opinions on various topics of public policy and current affairs, in the form of short essays (from 300 to 3000 words each).  She then read each essay aloud, recording it onto cassette tape.  What fun she would have had with blogs and podcasts!
Like all Australian pioneer women, she was courageous and unflinching in the face of great odds, and I was privileged to have known her.   Sadly, after her death her writings and recordings were thrown away.  I am reminded of Clover Adams, whose husband Henry Adams destroyed, after her death, all the photographs she had taken that he could find.