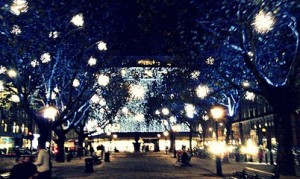 This past week I attended a concert in the Cadogan Hall by the Moscow Soloists String Chamber Ensemble, led by violist Yuri Bashmet.  The concert seems to have attracted many in London’s large Russian-speaking community, and there were idling limousines outside the Hall.
Although technically the playing was very proficient, the concert and the performance left me disappointed.  First, everyone on stage was dressed entirely in black, even the soloists.   Was this a convention of undertakers, I wondered?  Second, almost nobody smiled, again not even many of the soloists.   Why so glum?  Third, a grand Steinway was used for the first concerto, and then remained stuck there on stage, like some silent, brooding animal.   All the movements of furniture between pieces was done by several of the ensemble members, rather than by the Hall staff, and it is true that the piano was moved a few inches.  But not out of the way, nor offstage.   It therefore blocked the sound (and the view) of the ensemble, and meant that the sound we in the audience heard was not projected uniformly to us.   Where I was sitting on the right-hand side of the hall I heard the two cellos and the lone double bass well, but not the violins, who were hidden by the piano.    I regard this failure to move the piano out of the way as unprofessional, although who was to blame for it is not clear.  Surely, the Hall staff should have moved it aside.
And the glumness!  The first item played was Bach’s Keyboard Concerto in D minor (BWV 1052) with soloist Ksenia Bashmet.  Her playing was technically excellent, although not from memory.   But the music was played with such po-faced seriousness, and without any apparent emotion.   This concerto is one of the great humorous compositions of all time, perhaps the greatest before Shostakovich’s Piano and Trumpet Concerto.  A few minutes with the score would tell you the composer was having fun as he wrote it, since it is filled with adornments and flourishes, completely unnecessary and joyful in the extreme, which feel exactly right under the fingers.   This is music written by someone who really liked playing a keyboard.   Moreover, the first movement has a rondo form, with the first theme returning and returning and returning, as if without end.   There is even a solo cadenza, which would traditionally be placed near the end of the movement, which here comes in the middle;  so even after we hear the cadenza, the movement still does not end.   This is Bach having fun.   But where was the fun or the joy from these performers?   Perhaps the fact that Ms Bashmet was not playing the music from memory meant she had had not yet internalized the score sufficiently to allow herself to have free reign with its interpretation.  This performance was not a patch on the last time I heard this concerto played – by Joanna MacGregor in Cottonopolis, a few years ago, whose physical joy at the music was evident from from the get-go.
Similarly, for Mendelssohn’s D Minor Violin Concerto, played by Alena Baeva.   Again the playing here was technically excellent, although also not from memory.   However, only in the third movement did we hear some emotion – at last, some passion and joy from the soloist in what is a very joyful movement.   The earlier movements were played, in contrast, without great passion, although very well.
The two middle soloists in the first half, Dinara Alieva (soprano) and Alexander Buzlov (cello), did smile at us after their performances, but their chosen music was less intellectually enriching.  Buzlov played a theme and variations by Rossini, something the audience seemed to like more than anything else they heard, but which I found superficial in comparison with the Bach or Mendelssohn.  I did  not stay for the second half, the concert already running too long.
Overall, I believe these performers were technically very proficient as musical performers, but not superb as communicators of musical ideas;  sadly, they did not achieve their potential on this occasion, and seemed to lack any group spark or chemistry.  Perhaps this was due to the presence of the brooding piano, obstructing complete interaction with the audience, or perhaps there were other reasons.  Oddly, the ensemble did not tune up on stage at the start of the concert:  I wonder if this explained the lack of social chemistry evident.
References:
Here is a review of the concert by Hugo Shirley of The Telegraph, who likewise noticed an absence of passion.
The photo shows the Christmas Lights in Sloane Square, near to Cadogan Hall.  Photographer:  Javier Lopez Pena (a member of the Matherati).

0 Responses to “Moscow Soloists in London”