A memorial salute to Vaclav Havel (1936-2011), who died yesterday.  I first read his Letters to Olga in the 1980s, and have found this and his other writings inspiring.  Havel’s life, too, reads like one of his own plays, and I long admired his courage, his profound self-awareness, and his integrity-of-purpose. 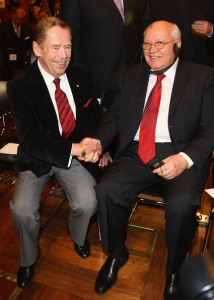 In one of his memoirs, Havel mentions the trepidation which Mikhail Gorbachev apparently felt prior to their first meeting, a meeting that took place in Moscow in 1990 shortly after Havel’s assumption of the Presidency of Czechoslovakia in December 1989, and immediately following Havel’s first official trip to the USA.  Gorbachev, a victim like any other citizen of Soviet misinformation and propaganda, it seems had never met a genuine dissident before and feared what Havel would say or do in the meeting, perhaps even fearing that Havel would attack him physically.
This anecdote came to mind today while reading a surreal account (Chodakiewicz 2011) of the fall of communism in Eastern Europe and the USSR, which claims the entire process of political transformation 20 years ago there was engineered by the Russian Communist nomenklatura as a grand, multi-national, multi-party, multi-year, multi-political-party conspiracy to remain in power.   Among Chodakiewicz’s offensive absurdities is to claim that the leadership of the Polish United Workers Party (the Polish communist party) was second only to that of Bulgaria in its servility to Moscow in the post-war period.   One wonders just why, then, did Poland experience no Stalinist show-trials in the early 1950s?  Why then was Wladyslaw Gomulka arrested, stripped of his posts and detained for several years in the same period, without being interrogated or tried or punished or executed (as were, say, his equivalent colleagues in Hungary and Czechoslovakia) and then later restored to a leadership position?  Was this, too, a charade that was part of the grand conspiracy?    How could such evident nonsense be published in a reputable refereed journal?
Footnote (2011-12-26):
In an interview with David Remnick of The New Yorker (2003), Havel says regarding his first meeting with Gorbachev (in which the two negotiated the withdrawal of Soviet armed forces from Czechoslovakia):

I met Gorbachev about two months after I was elected President.  We went to Moscow, for my first visit to the Kremlin, and we met for eight or nine hours.  At first, Gorbachev looked at me as if I was some kind of exotic creature – the first living dissident he ever saw, who was coming to him as the head of a state that had been part of his realm.  But, gradually, we developed a kind of friendship, which had even begun to develop at the end of that first long visit to the Kremlin.”

References:
Guardian obituary here, and Economist tribute here.  The Economist claims that Charter 77 was the “first open manifestation of dissent inside the Soviet empire”.  That claim rather ignores the various uprisings going back at least to 1953 (in the DDR), in Hungary in 1956, in Poland on numerous occasions, and even in Moscow – the public protest by the Moscow Seven in August 1968 against the Warsaw Pact invasion of Czechoslovakia, which was indeed, one of several protests in the USSR and elsewhere in the Eastern Bloc.
A salute to another Czech hero here, along with a note on the leninist nature of Gorbachev’s reforms.   And here a tribute to the Moscow Seven.
Marek Jan Chodakiewicz [2011]: Active measures gone awry:  Transformation in Central and Eastern Europe, 1989-1992.  International Journal of Intelligence and Counter-Intelligence, 24 (3): 467-493.
David Remnick [2003]:  Exit Havel.  The New Yorker, 17 February 2003.