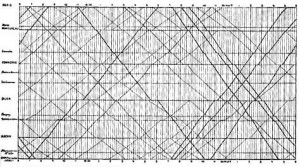 For some time, I have been writing on these pages that the currently-fashionable paradigm of the Information Society is inadequate to describe what most of us do at work and play, or to describe how computing technologies support those activities (see, for example, recently here, with a collection of posts here).   Most work for most people in the developed world is about coordinating their actions with those of others  – colleagues, partners, underlings, bosses, customers, distributors, suppliers, publicists, regulators, und so weiter.   Information collection and transfer, while often important and sometimes essential to the co-ordination of actions,  is not usually itself the main game.
Given the extent to which computing technologies already support and enable human activities (landing our large aircraft automatically when there is fog, for example), the InfoSoc paradigm, although it may describe well the transmission of zeros and ones between machines, is of little value in understanding what these transmissions mean.  Indeed, the ur-text of the Information Society, Shannon’s mathematical theory of communications (Shannon 1948) explicitly ignores the semantics of messages!  In place of the InfoSoc metaphor, we need another new paradigm, a new way to construe what we are all doing.  For now, let me call it the Joint-Action Society, although this does not quite capture all that is intended.
I am pleased to learn that I am not alone in my views about InfoSoc.   I recently came across an article by the late Peter Martin, journalist, editor and e-businessman, about the lessons from that great disaster of privatization of Railtrack in the UK.  (In the 1980s and 90s, the French had grand projets while the British had great project management disasters.)  Here is Martin, writing in the FT in October 2001 (the article does not seem to be available online):

Railtrack had about a dozen prime contractors, which in turn farmed out the work to about 2,000 subcontractors.  Getting this web of relationships to work was a daunting task.  Gaps in communication, and the consequent “blame culture” are thought to be important causes of the track problems that led to the Hatfield crash which undermined Railtrack’s credibility.
.  .  .
These practical advantages of wholesale outsourcing rely, however, on unexamined assumptions.  It is these that the Railtrack episode comprehensively demolishes.
The first belief holds that properly specified contracts can replicate the operations of an integrated business.  Indeed, on this view, they may be better than integration because everyone understands what their responsibilities are, and their  incentives are clear and tightly defined.
This approach had a particular appeal to governments, as they attempted to step back from the minutiae of delivering public services.  British Conservative governments used the approach to break up monolithic nationalised industries into individual entities, such as power generators and distributors.
They put this approach into effect at the top level of the railway system by splitting the task of running the track and the signalling (Railtrack’s job) from the role of operating the trains.  It is not surprising that Railtrack, born into this environment, carried the approach to its logical conclusion in its internal operation.
.  .  .
In 1937, the Nobel prize-winning economist Ronald Coase had explained that companies perform internally those tasks for which the transactional costs of outsourcing are too high.
What fuelled the outsourcing boom of the 1990s was the second unexamined assumption – that the cost of negotiating, monitoring and maintaining contractual relationships with outsourcing partners had dropped sharply, thanks to the revolution in electronic communications.  The management of a much bigger web of contractors – indeed, the creation of a “virtual company” – became feasible.
In practice, of course, the real costs of establishing and maintaining contracts are not those of information exchange but of establishing trust, alignment of interests and a common purpose.  Speedy and cheap electronic communications have only a minor role to play in this process, as Coase himself pointed out in 1997.
.   .   .
And perhaps that is the most useful lesson from the Railtrack story: it is essential to decide what tasks are vital to your corporate purpose and to devote serious resources to achieving them.   Maintaining thousands of miles of steel tracks and stone chippings may be a dull, 19th century kind of task.   But as Railtrack found, if you can’t keep the railway running safely, you haven’t got a business.”

0 Responses to “Railtrack and the Joint-Action Society”