I am a great fan of the films of Terence Malick, and so I was delighted to read John Patterson’s recent article proclaiming Malick’s The New World as the single film masterpiece of the decade just ending. 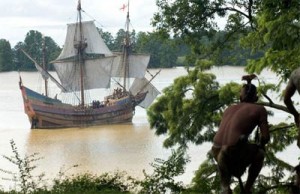 It may seem like an exaggeration, but with The New World cinema has reached its culmination, its apotheosis. It is both ancient and modern, cinema at its purest and most organic, its simplest and most refined, made with much the same tools as were available in the infancy of the form a century ago to the Lumières, to Griffith and Murnau. Barring a few adjustments for modernity – colour, sound, developments in editing, a hyper-cine-literate audience – it could conceivably have been made 80 years ago (like Murnau and Flaherty’s Tabu). This is why, I believe, when all the middlebrow Oscar-dross of our time has eroded away to its constituent molecules of celluloid, The New World will stand tall, isolated and magnificent, like Kubrick’s black monolith. Anything else that survives from now till then will by comparison probably resemble 2001’s grunting apes. To quote, simultaneously, Godard’s Pierrot le Fou and primitivist auteur Sam Fuller – whose 1957 western Run of the Arrow is a sort of thematic inbred bastard cousin of The New World – Malick is seeking “in a word: emotion!”
Malick’s mantra for The New World was “natural light, no cranes, no big rigs, handheld”. In other words, barebones, stripped-to-the-chassis, organic plein-air film-making. The second unit was despatched to gather beautiful and captivating visual ephemera – including breathtaking images of the film’s two lovers before a real lightning storm at sundown, and pennants of ducks quacking their way though the magic-hour’s crepuscular golden light – while soundmen taped riotous birdsong, forest murmurs and the hiss and babble of water in motion. And the handheld shots in Virginia are, in fact, just one half of an overarching visual scheme; in bold contrast, the English scenes (where the landscape is sculpted and tamed, where life is governed by rites and rituals as baffling and ornate as those of the Indians), the camera is almost always locked down or running, tamed, on tracks.
And then there is the editing. Malick extrudes his movies from the film-bins in the editing suite, “finding” as much of the movie there as he does on location. I’ve seen three separate edits (the 150 minute pre-release version that knocked me out, the 135 release cut (25 of those 30 viewings), and the Blu-Ray director’s cut of 172 minutes) and all strike distinct and equally wondrous variations on the same themes, yet seem radically different to one another at a gut level. This clearly suggests that Malick’s editing has nothing in common with the frame-fucking visual aesthetics of Tony Scott, as has been suggested by more than one fool. In fact, it has more in common with Godard’s jump-cuts, which once seemed so radical and disorienting but which have been absorbed and are now part of the common, comprehensible rubric of the form. Far from being meaningless or self-indulgent, there is insight, a mini-revelation, a deepening of meaning, or just a blessed surprise in almost every one of Malick’s cuts, which cleave in style to this rich filmic inheritance, whereas Scott is a creature of violent eye-ache, and little else.
The layering of sound also partakes of the full gamut of historical precedent and technical possibility, with Malick inhaling the past then exhaling the future of sound design. Along with Kubrick and Scorsese, he remains an American master of the voiceover. In The New World, the three main characters all share their thoughts with us, often when the speaker is out of shot, in low murmurs and incantatory tones (the voiceovers often sound like silent movie title-cards), until they feel like a unified single voice. Plenty of people hate this about Malick, and resort to the conventional line about voiceovers being the last resort of lazy film-makers. Many also dislike the structure of The New World, which is adapted from Wagner: ascend, ascend, ascend, ascend.
That is how The New World works, on an ever upwardly moving scale towards the climactic moment of release, when the movie ends on a bird skittering out of a tall tree in the edenic forest with a frrrrrp-sound of beating wings – fade to black. If you allow it, if you lower your resistance, The New World is not a movie you simply watch – it is a movie that happens to you, overwhelms you, like the weather, or true love. Malick took his time with this, his one true masterpiece, and so should you. As everything else rots away, it will abide.

My only disagreement with Patterson in this article is his dislike of Malick’s movie about war, The Thin Red Line, which is also one of the great films of all time, and certainly the greatest film about war.  Of course, the film moves slowly at times – fighting is perhaps 90% waiting around.  And, of course, there are close-up shots of nature (as indeed in all Malick’s films) – soldiers are often lying as close to dirt and grass and insects as Malick’s camera gets.
Patterson  is not alone in praising The New World.  When the film was released in 2006, the indefatigable Mark Cousins, writing in Prospect Magazine (Issue 120, 22 March 2006), also declared it a masterpiece:

Terrence Malick’s The New World is a retelling of the settlement of America and the John Smith/Pocahontas romance, so you’d expect it to be only secondarily about England. Much of the glorious first half of the film is like a prayer to the swamplands of Virginia. But in the second half the story follows Pocahontas and her husband John Rolfe to the English court of James I. England is portrayed as a world of gateways. Nearly every scene is framed by one, or features a character passing through one. For Malick, England is obsessed by the idea of home, of arriving, of framing nature as something to be seen from inside looking out. This is an art and garden historian’s view of England, and it works brilliantly in The New World. But it’s not only the English bits of this film which seem to say something about England. The New World is the most romantic film I have ever seen, constantly externalising mental states, enraptured by the rush of feeling caused by nature and by love, intoxicated by sensation. It is not in any way a state of the nation film, at least not of the English nation. But it is a masterpiece nevertheless, one of the most thoughtful films ever made, and many of its thoughts derive from England.

0 Responses to “Film: The New World”