Ealier, I quoted Marion Milner on the zen of sunday-painting.   The British artist, Bridget Riley, writing for a catalog that accompanied a retrospective of her work presented recently at the Walker Gallery in Liverpool, UK, talks about the non-propositional thinking involved in drawing and painting, particularly during the exploration that she undertakes as she begins each new work.

For me, drawing is an inquiry, a way of finding out – the first thing that I discover is that I do not know. This is alarming even to the point of momentary panic. Only experience reassures me that this encounter with my own ignorance – with the unknown – is my chosen and particular task, and provided I can make the required effort the rewards may reach the unimaginable. It is as though there is an eye at the end of my pencil, which tries, independently of my personal general-purpose eye, to penetrate a kind of obscuring veil or thickness. To break down this thickness, this deadening opacity, to elicit some particle of clarity or insight, is what I want to do.

The strange thing is that the information I am looking for is, of course, there all the time and as present to one’s naked eye, so to speak, as it ever will be. But to get the essentials down there on my sheet of paper so that I can recover and see again what I have just seen, that is what I have to push towards. What it amounts to is that while drawing I am watching and simultaneously recording myself looking, discovering things that on the one hand are staring me in the face and on the other I have not yet really seen. It is this effort ‘to clarify’ that makes drawing particularly useful and it is in this way that I assimilate experience and find new ground. (p. 15)

. . .
You cannot deal with thought directly outside practice as a painter: ‘doing’ is essential in order to find out what form your thought takes. The ‘new curves’ that I started in 1998 grew directly out of paintings such as Shimmered Shade. The latent visual arcs and sweeping movements came to the fore in Painting with Verticals 1 (2006) and Red with Red 1 (2007). Retaining the diagonals and verticals of the earlier group of paintings, I introduced a curve that connected to the existing structure. This is the underpinning of my new curvilinear work. The vertical is still there, acting like a break in the movement across the canvas. The cut collage pieces define the various contours that arise from combining and recombining the slender curve with its diagonal accents. This has developed into a layering technique that allows me to weave forms and colours together in a supple plastic space. I have reduced the number of colours and increased the scale of the imagery. Would it be possible to once again build up a repertoire of these invented forms, a repertoire that might gradually acquire sufficient momentum to put itself at risk, to precipitate its own kind of hazard? It is only through the experience of working that answers may be discovered within the inner logic of an invented reality such as the art of painting.” (p. 18) 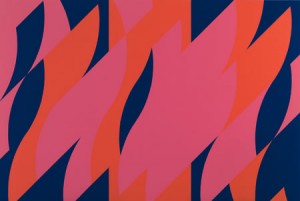 0 Responses to “Bridget Riley on drawing as thinking”