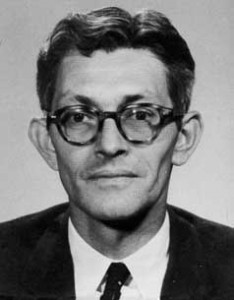 A recent issue of the TLS ran a review by Terence Hawkes of the biography by Michael Holzman of Jim Angleton, head of counter-intelligence at the CIA.  Holzman’s book, although mostly written from secondary sources, is a fine summary of Angleton’s life and career.  It is marred, however, by (a) Holzman’s annoying (academic) habit of quoting something or somebody and  then repeating, verbatim, key words from that very quotation in the following paragraph, as if we readers were idiots, unable to read for ourselves or contemplate an idea for longer than a paragraph.  And, (b) by a casual sloppiness about dates.  Call me old-fashioned, but I think a historian should not simply say “in  May that  year”  when the last mention of the specific year was some tens of pages and several anecdotes or set-pieces back.   No doubt Holzman always knows which of the 71 years of Angleton’s life and the various ones before or since he is currently referring to, but this is rarely obvious to the reader of this book, even to a careful reader.   In view of the subject matter and Holzman’s theme (that Angleton’s training in so-called practical criticism was invaluable to his career in counter-intelligence), one has to wonder if such sloppiness is deliberate.
Holzman also does not tell us much about the actual theory and practice of counter-intelligence, despite the title and the claims he makes up front.   In particular, his treatment of the Nosenko case is misleading, partly he believes the official CIA line and because he does not refer to the most recent publication on the case, namely the book by Bagley. Hawkes seems to have followed Holzman in his garden-path-up-straying.
Unlike literary criticism, espionage is not only about what to believe, it is also about what to do.  It may be the case that Yuri Nosenko was a genuine Soviet defector, as Holzman claims CIA eventually came to believe.  Others closely involved in the case, such as retired CIA agent Tennent Bagley (2007) have argued compellingly that Nosenko was in fact a KGB plant, not a genuine defector.
Whether or not Nosenko was a genuine defector, and whether or not CIA leadership believed him to be a genuine defector, CIA would also need to concern itself with what impact a revelation of their beliefs would have on KGB, as I have argued before, and thus on what proposition to seek to have KGB believe about CIA’s beliefs in the matter.   If CIA were seen by KGB to accept Nosenko’s testimony (inconsistent and incomplete, by his own admission) too quickly, KGB may not accept as genuine any CIA profession of belief in his bona fides.  So, some delay and equivocation in decision-making was called for.  If CIA professed to believe that Nosenko was a plant or allowed KGB to conclude that CIA believed Nosenko to be a plant, then CIA risked signalling to KGB that they (CIA) were also rejecting all the testimony he arrived in the west with, which included detailed protestations of KGB non-involvement in the assassination of President John F. Kennedy.    Whether or not CIA believed that KGB were involved in that assassination, they may or may not have wished to let KGB know what they believed, at least at that particular moment.  In any case, perhaps a clever (and cunning) CIA would seek to have KGB believe that Nosenko was believed, in order to see how the game played itself out.
So, one possible course of action for CIA was to signal to KGB that they accepted Nosenko as a genuine defector, but to signal also that they came to this decision only slowly and painfully.   How better to do this than to interrogate the man at length and (allegedly) harshly, and then, after years of apparent indecision and multiple internal investigations (some of which may even have been genuine), decide to accept him publicly as a true defector.   This public acceptance – consultancy fees, letters, flags, medals, and all – even now, four decades later, may have absolutely no connection whatever with what CIA leadership really believed then or, indeed, what they believe now.
It’s not only litcrit that gets an outing in these events.  If any philosopher reading this wonders about the practical usefulness of dynamic epistemic modal logic, wonder no more.
References:
Tennent H. Bagley [2007]:  Spy Wars.  New Haven, CT, USA:  Yale University Press.
Terence Hawkes [2009]: “William Empson’s Influence on the CIA.”  Times Literary Supplement, 2009-06-10.
Michael Holzman [2008]:  James Jesus Angleton, the CIA and the Craft of Counterintelligence.  Boston, MA, USA: University of Massachusetts Press.

0 Responses to “Epistemic modal logic at the CIA”