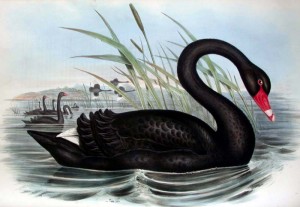 Nassim Taleb has an article in the FinTimes presenting ten principles he believes would reduce the occurrence of rare, catastrophic events (events he has taken to calling black swans).  Many of his principles are not actionable, and several are ill-advised.  Take, for instance, # 3:

3. People who were driving a school bus blindfolded (and crashed it) should never be given a new bus.

If this principle was applied, the bus would have no drivers at all.   All of us are driving blindfolded, with our only guide to the road ahead being what we can apprehend from the rear-view mirror.  Past performance, as they say, is no guide to the future direction of the road.
Or take #6:

6. Do not give children sticks of dynamite, even if they come with a warning.  Complex derivatives need to be banned because nobody understands them and few are rational enough to know it. Citizens must be protected from themselves, from bankers selling them “hedging” products, and from gullible regulators who listen to economic theorists.

Well, what precisely is “complex”?  Surely, Dr Taleb is not suggesting the banning of plain futures and options, as these serve a valuable function in our economy (enabling the parceling and trading of risk).  But even these are too complex for some people (such as those farmers, dentists, and local government officials currently with burnt fingers), and surely such people need protection from themselves much more so than the quant-jocks and their masters on Wall Street.  So, where would one draw the line between allowed derivative and disallowed?
Once again, it appears there has been a mis-understanding of the cause of the recent problems.  It is not complex derivatives per se that are the problem, but the fact that many of these financial instruments have, unusually, been highly-correlated.  Thus, the failure of one instrument (and subsequently, one bank) brings down all the others with it — there is a systemic risk as well as a participant risk involved in their use.   Dr Taleb, who has long been a critic of the unthinking use of Gaussian models in finance, I am sure realises this.

0 Responses to “Black swans of trespass”