Horace’s Ode I:IX, Vides ut alta (translated by David West), was inspired by Mount Soracte (aka Soratte), in the Tiber Valley, north of Rome, and pictured here.  Carpe diem is the theme. 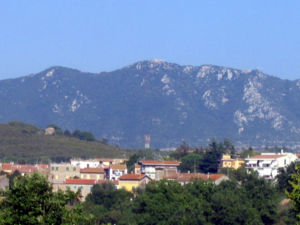 You see Soracte standing white and deep
with snow, the woods in trouble, hardly able
to carry their burden, and the rivers
halted by sharp ice.
Thaw out the cold. Pile up the logs
on the hearth and be more generous, Thaliarchus,
as you draw the four-year-old Sabine
from its two-eared cask.
Leave everything else to the gods. As soon as
they still the winds battling it out
on the boiling sea, the cypresses stop waving
and the old ash trees.
Don’t ask what will happen tomorrow.
Whatever day Fortune gives you, enter it
as profit, and don’t look down on love
and dancing while you’re still a lad,
while the gloomy grey keeps away from the green.
Now is the time for the Campus and the squares
and soft sighs at the time arranged
as darkness falls.
Now is the time for the lovely laugh from the secret corner
giving away the girl in her hiding-place,
and for the token snatched from her arm
or finger feebly resisting.

Horace [1997 AD/23 BCE]: The Complete Odes and Epodes. Translation by David West. Oxford, UK: Oxford University Press.
Note: The opening of this poem was recited (in Latin) in May 1944 by German army officer and Military Governor of occupied Crete, General Heinrich Kreipe, while being transported following his kidnapping by the Cretan resistance during World War II.   Traveling with the resistance, British SOE agent Major Patrick Leigh Fermor recognized the ode, and completed the stanza to the surprise of Kreipe.   There is something indescribably sad about this story, a small incident revealing so much about Nazi destruction of Europe’s common culture.