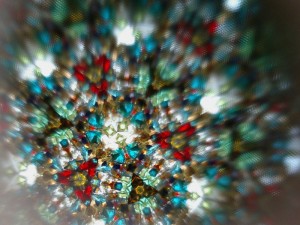 Is the economy like a pendulum, gradually oscillating around a fixed point until it reaches a static equilibrium?  This metaphor, borrowed from Newtonian physics, still dominates mainstream economic thinking and discussion.  Not all economists have agreed, not least because the mechanistic Newtonian viewpoint seems to allow no place for new information to arrive or for changes in subjective responses.   The 20th-century economists George Shackle and Ludwig Lachmann, for example, argued that a much more realistic metaphor for the modern economy is a kaleidoscope.  The economy is a “kaleidic society, interspersing its moments or intervals of order, assurance and beauty with sudden disintegration and a cascade into a new pattern.” (Shackle 1972, p.76).
The arrival of new information, or changes in the perceptions and actions of marketplace participants, or changes in their subjective beliefs and intentions, are the events which trigger these sudden disruptions and discontinuous realignments.   Recent events in the financial markets show we are in a kaleidic moment right now.  If there’s an invisible hand, it’s not holding a pendulum but busy shaking the kaleidoscope.
Reference:
Geoge L S Shackle [1972]: Epistemics and Economics.  Cambridge, UK:  Cambridge University Press.