Today’s poem is by Judith Wright (1915-2000), an Australian poet whose childhood was spent in the Northern Tablelands of New South Wales, and who then spent most of her married life in Mount Tamborine, in south east Queensland (just west of the Gold Coast), moving later to Braidwood, in the Southern Tablelands of NSW (east of Canberra).   To always live so close to the sea, but not at it, marked her clearly as someone of the Great Divide.   All these places are very familiar to me, and growing up with similar stories of cattle droving and bushrangers such as Thunderbolt, her poem resonates greatly.  Of course, the season there now is summer, not the chilling, high-ranges winter she writes of. 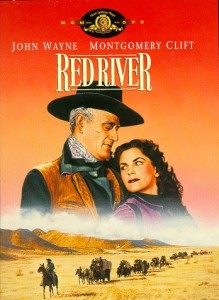 The image is of the film “Red River” by Howard Hawks (1948), which was also about a long cattle drove.

South of my days’ circle, part of my blood’s country,
rises that tableland, high delicate outline
of bony slopes wincing under the winter,
low trees, blue-leaved and olive, outcropping granite-
clean, lean, hungry country. The creek’s leaf-silenced,
willow choked, the slope a tangle of medlar and crabapple
branching over and under, blotched with a green lichen;
and the old cottage lurches in for shelter.
O cold the black-frost night. the walls draw in to the warmth
and the old roof cracks its joints; the slung kettle
hisses a leak on the fire. Hardly to be believed that summer
will turn up again some day in a wave of rambler-roses,
thrust it’s hot face in here to tell another yarn-
a story old Dan can spin into a blanket against the winter.
seventy years of stories he clutches round his bones,
seventy years are hived in him like old honey.
During that year, Charleville to the Hunter,
nineteen-one it was, and the drought beginning;
sixty head left at the McIntyre, the mud round them
hardened like iron; and the yellow boy died
in the sulky ahead with the gear, but the horse went on,
stopped at Sandy Camp and waited in the evening.
It was the flies we seen first, swarming like bees.
Came to the Hunter, three hundred head of a thousand-
cruel to keep them alive – and the river was dust.
Or mustering up in the Bogongs in the autumn
when the blizzards came early. Brought them down;
down, what aren’t there yet. Or driving for Cobb’s on the run
up from Tamworth – Thunderbolt at the top of Hungry Hill,
and I give him a wink. I wouldn’t wait long, Fred,
not if I was you. The troopers are just behind,
coming for that job at the Hillgrove. He went like a luny,
him on his big black horse.
Oh, they slide and they vanish
as he shuffles the years like a pack of conjuror’s cards.
True or not, it’s all the same; and the frost on the roof
cracks like a whip, and the back-log break into ash.
Wake, old man. this is winter, and the yarns are over.
No-one is listening
South of my days’ circle.
I know it dark against the stars, the high lean country
full of old stories that still go walking in my sleep.

0 Responses to “Poem: South of My Days”