I have previously defined marketing as the organized creation and management of perceptions, which I am sure is not a controversial definition among marketers.   Effective perception management requires you to know and understand all the other entities in your business environment —  your customers, your competitors, your upstream suppliers, your downstream distributors, other partners (such as providers of credit to your customers), and your regulators.  What does it mean to “know and understand” someone?
Well, you can listen to their words and observe their actions.   But words may not provide much guidance to actions – people are notoriously unreliable predictors – or even recallers – of their own behaviour, and they may have many reasons (legitimate or not) to prevaricate, dissemble or distort reality when speaking about their own past actions and intentions.   And observing their actions may be too late if you have a major investment decision to make, such as Go-No Go decision for new product development or new venture launch.  So, “understanding” people means you need to know their intentions, perhaps better than they do themselves.   And for this, you need to understand people’s personalities, their attitudes, their cultures, and the environments in which they make their decisions.   None of this easy, and it requires a great deal of empathy and sympathy with the people you are trying to understand.  Marketing research might be defined as an organized attempt to identify and deploy rigorous methods aiming to know and understand a target group of entities.
The same deep challenge arises for intelligence agencies, who are also trying to know and understand a group of people.    As CIA veteran Robert Baer (among many others) has argued, all the sophisticated satellite imagery and data-mined mobile phone calls in the world won’t tell you about what is inside people’s heads, and what intentions they have.  For that (he argues), people on the ground are needed, able to operate seamlessly within the culture of the targeted community, listening and talking to the enemy.    Empathy and sympathy are necessary here too, although these attributes are often disparaged by many involved as “taking the side of the enemy” or “going native”.     I have long been struck by how much the people leading CIA and successive US administrations in the 1950s and 1960s were able – sometimes more so and sometimes less – to empathize with their opposite numbers in the Kremlin (eg, during the Cuban Missile Crisis), but completely unable to empathize with the supporters of the Vietminh and the Communist Party of Vietnam in the same period.  Former US Secretary of Defense, Robert McNamara, to his lasting credit, seems to have realised this, if only in retrospect.  (This failure to empathize with the Vietnamese is even more remarkable given the USA’s own armed struggle to achieve Independence from colonial rule.)
Seeing last week Uli Edel’s film, Der Baader-Meinhof Komplex (a film treatment of Stefan Aust’s book) brought these thoughts to mind again, because the film portrays the primary intelligence official leading the West German Government’s anti-terrorist efforts against the Baader Meinhof Group (aka the Red Army Faction, RAF) in the 1970s as quite able to empathize with the RAF, or at least to understand with sympathy their reasons for turning to violence.   When 10% of the population in northern Gemany (according to some polls) felt able to say to a pollster that they would be willing to hide members of the RAF in their homes if asked, then considerable tactical cunning and subtlety would be required to defeat the terrorists.    Such tactics do not come from nowhere, but require empathy and sympathy of the terrorist cause for their ideation and effective execution. 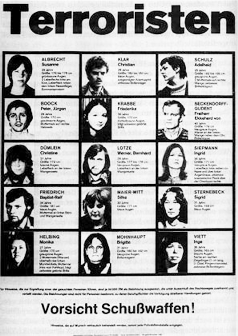 Alex Goodall, over at A Swift Blow to the Head, has a new post trying to understand the historical motivations of the terrorists likely to have been behind the Mumbai atrocity last week.   Such efforts at understanding are to be applauded.  Were President-elect Obama to nominate me to the post of Director of CIA, my first action would be to commission independent historical analyses of Catholic resistance to the Protestant rule of Elizabeth I’s police-state in 16th century England (among whose victims was Robert Southwell), and of the anarchist and revolutionary socialist campaigns of terror and assassination in the second half of the 19th century common across the developed world.  My aim in this would be to ask what lessons have been learnt from these past experiences.   Which leads me to wonder:  where is the intelligence community’s Centre for Lessons Learned?
Postcript: An immediate objection to the relevance of these ideas to contemporary events may be that the Catholic recusants in Elizabethan and Jacobean England were not, in general, suicide bombers.   While it is correct that they were mostly not bombers, a characteristic common to the English Catholic priests illegally returning to England to work underground in this period was apparently a great personal desire for martyrdom.  And in this desire they had  – and perhaps still have – considerable sympathy in the Catholic community.   The nearest Roman Catholic Church to where I am writing this post (in England), and built just 40 years ago, has a side chapel devoted to The English Martyrs.
References:
Stefan Aust [2008]:  The Baader-Meinhof Complex.  London, England:  The Bodley Head. (Translation by Anthea Bell.)
Robert Baer [2002]:  See No Evil.  The True Story of a Ground Soldier in the CIA’s War on Terrorism.  New York, NY, USA:  Three Rivers Press.
Uli Edel [Director, 2008]: Der Baader-Meinhof Komplex.  Germany.
Errol Morris [Director, 2003]:  The Fog of War:  Eleven Lessons from the Life of Robert S. McNamara. USA.

0 Responses to “Knowing and understanding The Other”