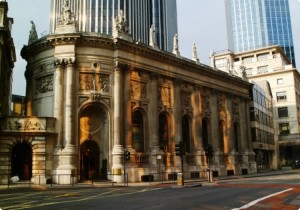 Gibson Hall, London, venue for DevCon1, 9-13 November 2015.  There was some irony in holding a conference to discuss technology developments in blockchains and distributed ledgers in a grand, neo-classical heritage-listed building erected in 1865. At least it was fitting that a technology currently taking the financial world by storm should be debated in what was designed to be a banking hall (for Westminster Bank). The audience was split fairly evenly between dreadlocked libertarians & cryptocurrency enthusiasts and bankers & lawyers in smart suits: cyberpunk meets Gordon Gekko.