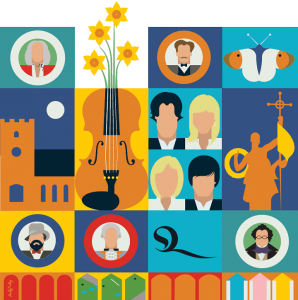 Two life-changing concerts this weekend, both including Finnish violin virtuoso, Pekka Kuusisto, and both in Folkestone as part of the annual Sacconi Quartet’s Chamber Music Festival.

The first was a  concert in St. Mary and St. Eanswythe’s Church that included the Sacconi Quartet and the Chamber Orchestra of the Royal College of Music. With PK, they performed Vivaldi’s Four Seasons, and knowing they would was the main reason for my attendance.  PK’s recording of Vivaldi is the most exciting and thrilling I know.  But this live performance was on another plane entirely.  Usually The Seasons are twee and effete and smugly complacent.  PK’s recording is not that, but rather raw and rustic.  (See my comments here.) The live performance, in contrast, was sharp and edgy, thrilling and exciting too but in a different way entirely to the recording.  If Vivaldi is usually suburban Barnet gemütlichkeit, then the recording is from the wild places of Cornwall or the Hebrides, and this performance was from the mean streets of Toxteth or Mile End.

PK’s playing as always was superb. He has an amazing ability to mimic the breathy tone of a flute, producing a sound sublime, something I have heard him do before in very different work.  Yet, at other times it was if he construed the violin as a percussion instrument, not hitting it with his hand but striking the strings in a multitude of carefully-calibrated ways with the bow.  Later, in the pub after the second concert, he agreed that this notion of the percussive violin described his intention.  Violinists often see the instrument as a sort of uncanny extension of themselves, and here was an extension that was brash, direct, and forceful – someone who is here to live out loud, in Zola’s great phrase.  How different to the twee Vivaldi of most other performances I have seen.

In addition, PK treated the work as a modern work, interpreting it afresh – moving around the stage, for example, to confront directly the other players in the various duets and rounds, having face-offs at various times, and interacting physically and with immediacy in accord with the temper of each phase of the music.  The other performers responded in kind to his enthusiasm.  The acoustics in the church were excellent, so that everything could be heard well.  This was certainly the best musical experience of my life, and I feel immensely privileged to have witnessed it.

The second concert followed straight afterwards, in the primary school across the street.  We were party to a violin and electronics meditation on Bach’s Partita in D minor, by PK and Teemu Korpipaa.  The movements of the Bach were played without modification by solo violin, and interleaved with duo improvisations on what we had just heard.  This was also sublime, and had the effect of elongating and deepening the emotions invoked by the Bach, an annotation that added to the original.  It was clear the two had worked together before, and so the annotations were profound and heartfelt.

0 Responses to “Earth moving in Folkestone”