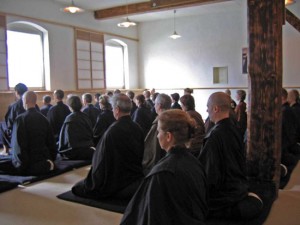 I miss reading the posts of the late Norman Geras, over at Normblog.   His views were always interesting, and his arguments very often acute. (I say this despite some condescension and ill-temper in his personal emails to me.  He clearly thought those of us who disagreed with him about religion were fools, and did not bother to hide his feelings.)
For all his mental incision in general, however, he had a blind spot when it came to religion, as I argued here.  His blind spot marked him, despite his lack of religious beliefs, as a person of the post-Reformation confessional view of life:  the view that thinking does (and always should) preceed acting, and that thinking leads to considered beliefs.  This is a peculiarly modern, western view, a view not shared by most of humanity, neither now nor in the past.  The entire weltanshauung of Zen Buddhism, for example, is that beliefs (in the form of enlightenment) are the consequence of religious practices, not necessarily their cause.  Norm, western philosopher to his fingertips, never got this.
S. Brent Plate makes a similar criticism of a recent questionnaire aimed at ranking US cities by their “Bible-mindedness”:

The assumptions of the pollsters betray a larger misconception concerning who religious people are and what they do. Questionnaires are still mired in the mostly-Protestant notion that religious people read holy books and have “beliefs” in their heads. It makes for good fodder on the religion news circuits but necessarily leaves out the lived realities of religious existence. For religious life in these United States, the potluck is just as important as the preacher. The soup kitchen as important as the scriptures.
What if we had polls that were indeed about religion and society? What would this mean? How would we ask? Who would we ask?
At the least, this would require the work of bodies, of actual breathing, eating people. We’d find that we social beings might believe things, but more importantly, we behave in particular manners. Our bodies move with other bodies in private and public ways, singing and swaying, seeing and smelling.
We don’t act out our beliefs as much as our beliefs are created through our actions.