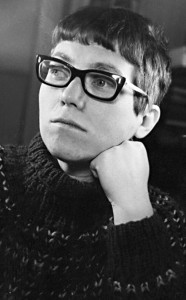 The death occurred last month of Natalia Gorbanevskaya (1936-2013, pictured in 1967), Russian poet and Soviet dissident, and one of the Moscow Seven, brave opponents of the occupation by forces of the Warsaw Pact of Czechoslovakia in August 1968.  From 1975 she lived in exile, initially in Israel and then in France.  For most of this time she was stateless, and did not have a passport until 2006, when granted Polish citizenship.   As in the 19th century, Russia disowns its best and brightest children.  The Economist has an obituary here.
There was more than this one protest against the invasion, with over 200 people involved in protests elsewhere in the USSR and across the Eastern Bloc.  A list of 160 Soviet protesters against the invasion, prepared by Memorial, is here.  The courage of the Moscow Seven and these others has been recognized by the Czech Republic, but not yet by the Russian Federation.   Indeed, Russia has still to apologize to Czechslovakia for the invasion.
From Gorbanevskaya’s poetry (translation by Daniel Weissbort):

The crime has not yet been expunged,
the hour of truth has not yet struck.
logs in the stove still ticking over,
although the fire’s already out.