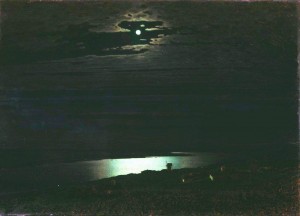 Last night, I caught the BBC Symphony Orchestra, under Sakari Oramo, with Olli Mustonen (piano) and Sergei Nakariakov (trumpet), at the Barbican, playing Tristan Murail’s Reflections/Reflets and Shostakovich’s Piano Concerto #1.  The Murail work was in two parts, the first (Spleen) a response to Baudelaire’s Les fleurs du mal, oozed sound colours slowly and langorously across the horizon, while the second (High Voltage) involved rapid-fire scales and runs.   I liked the first part more than the second.   The composer was in the audience.
In the Shostakovich, Nakariakov’s trumpet was superb. I have never heard the sad, muted solo of the second movement played so hauntingly: His tone there was breathtaking, and it was as if the sound was coming from another room, perhaps by some form of ventriloquism (a trumpet ventriloquy?). What came immediately to mind was the similarly sublime green-tinged, luminous moon of Arkhip Kuindzhi’s famous 1881 painting Moonlit Night on the Dniepr (pictured).  In contrast, Mustonen’s piano playing was disappointing.  His left hand was decidedly softer than the right for most of the piece.  At first, I thought this may be an acoustic artefact of where I was sitting (at the front left, almost directly facing the pianist’s back), but when he deployed his left hand loudly I did hear it loudly.   The issue is that for much of the work, Shostakovich was writing – as he does so often – in the style of a two-part invention, not a music-hall song with a cantabile solo with uninteresting accompaniment, so the two hands need to play equally loudly so that we hear the parts clearly.
The performance had another, more existential, problem:  This concerto is one of the funniest works in the entire orchestral repertoire, and yet last night’s interpretation was intensely serious.  Perhaps having in charge two Finns – a nation notoriously dour – overwhelmed the fun in the music.    And, I think it would have been better had the pianist not had his back to the trumpeter.  The entire work is a sharp-tongued dialogue between the two, particularly the duel at the end, and to hear what is meant to be fast-witted banter played so seriously was disappointing.