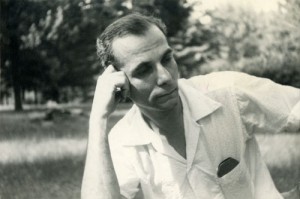 A nice story about the possibly unknown effects of our actions, from a review by mathematician Marjorie Senechal of a book about German Jewish mathematicians:

Fritz John (1910–1994) [pictured in 1953], Jewish on his father’s side, left Germany in 1933 for England; in 1935 he was appointed assistant professor of mathematics at the University of Kentucky in Lexington.  Back in the 1930s, the University of Kentucky was small and isolated but, except for two years of war-related work, John stayed there until 1946, when he moved permanently to New York University.  Surely he was glad to rejoin his mentor, [mathematician Richard] Courant.  But he made a difference in Lexington; I don’t know if he ever knew it.
I grew up near Lexington and took piano lessons from a teacher in town named Helen Lipscomb.  Helen was a polio victim, confined to a wheelchair; her brother, Bill, was a chemist at the University of Minnesota.  I met Bill Lipscomb for the first time in 2009, two years before he died at the age of ninety-two.  By then he’d taught at Harvard for forty years and earned a Nobel prize (1976) [in Chemistry] for his work on boranes.  Unlike me, Bill had attended the University of Kentucky after a Lexington public high school; he’d had a music scholarship and studied chemistry on the side.  “Why did you decide to become a chemist instead of a musician?” I asked him. “What changed your mind?” “A math class,” he told me. “A math class taught by a German named Fritz John.” (page 213)

0 Responses to “Our impact on others”