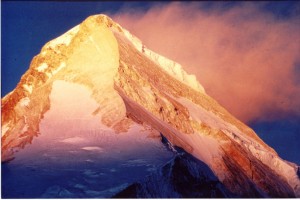 . . . of Boris N. Delone (1890-1980), Russian mathematician, moutaineer, and polymath, member of a famous family of mathematicians and physicists, whose grandson was a dissident poet:

July 6, 1975, Delone spends a cold night (-25 degrees C) in a tent on a glacier under the beautiful peak of Khan Tengri (7000 m, the Tien Shan mountain system, Central Asia) [pictured, at sunset] at a height of about 4200 m.  In the morning a helicopter picks him up to take him to Przhevalsk (now Karakol), a Kyrgyz city at the eastern tip of Lake Issyk-Kul.  From Przhevalsk he takes a local flight to Frunze (now Bishkek), the capital of Kyrgyzstan, where the heat exceeds 40 degrees C.   After queuing up for a few hours and with the help of some “kind people” and the Academy of Sciences membership card he succeeds in purchasing an air ticket to Moscow.   Late at night he arrives at Domodedovo airport in Moscow, from which he still needs to go to his country house near Abramtsevo (Moscow oblast).   Taking the last commuter train, he arrives at the necessary station at around 2 am; from there it is another three kilometers to his house, half of which are in a dark dense forest.  He loses his way and, after roaming around the night forest for a long time, leaves his heavy rucksack in a familiar secluded place.  Only in the morning does Delone succeed in getting home safely.”  (page 13). 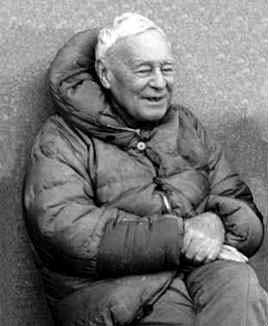