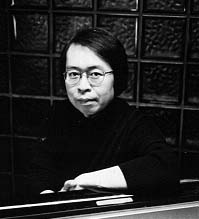 Two weeks ago, the BBC Symphony Orchestra held a series of concerts at the Barbican and at LSO St Luke’s of new and 20th-century music from Japan.  Parts of these concerts were rebroadcast on BBC Radio 3.  A highlight was a work called Bird Heterophony by Akira Nishimura, who teaches at the Tokyo College of Music.  This music was loud, forceful and exciting, and very impressive.  It reminded me of those great early works of Iannis Xenakis, Metastaseis and Pithoprakta.    Much as I like the impressionism of Toru Takemitsu (whose November Steps was also performed), it is nice to hear modern Japanese music from a vastly different sound world.   It is a pity though about the title:  how much better the music could be appreciated if Nishimura had left the title abstract, rather than steering our mental imagery with a representational title.
The one recording seems to be unavailable, at least in the West.    Messages for the 21st Century Volume 1.   Orchestra Ensemble Kanazawa, under Hiroyuki Iwaki.   Deutsche Grammophon,  POGC-1719, 1993.
Meanwhile a clip of the performance is currently still available from the BBC Radio 3 website for the program, Hear and Now, 2 February 2013 edition.