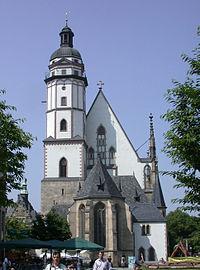 The death of the pianist and musicologist Charles Rosen (1927-2012) last month led to many tributes.   While I have read and admired much of Rosen’s writing, he had a strange and unreasonable dislike of Mendelssohn’s music which led his thinking astray.
Famously, Rosen accused Mendelssohn of having invented “religous kitsch in music” (Rosen 1998, p. 590).  By this Rosen meant that his music “neither expressed nor represented anything, but only stimulated in the listener the illusion of being present at a religious service.  It created a feeling of pious devotion in the audience without making any awkward demands.” (p. 595).
There is so much wrong or contestable with this viewpoint that it is hard to know where to start.  Rosen’s view is wrong because he is accusing Mendelssohn’s music of being insincere, a claim for which no unrefutable evidence could be given due to music’s abstract nature.    Even for representational visual art, accusations of artistic insincerity are very difficult to support, as I noted when challenging Germaine Greer’s bad-tempered attack on pre-Raphaelite painting, here.    How much more so for music?
Second, let us consider for a moment that phrase “awkward demands“.  What could these demands possibly be?  Does Rosen mean adherence to particular religious beliefs?   Well, even if a composer were so minded (as say that devout Lutheran-Pietist composer JS Bach, or that Masonic composer WA Mozart, or that devout Roman Catholic composer James MacMillan, or that devout Russian Orthodox composer John Tavener could each be), again the abstract nature of music – even when coupled with words – makes a belief a difficult thing to demand.  Precisely how, one would wish Rosen to answer, could a musical performance demand adherence to particular religious beliefs of its listeners?   One can attend Roman Catholic mass in any church on any Sunday in any western country and participate in singing hymns written by the devout Lutheran JS Bach and the devout Methodist Samuel Wesley, something that has been true for perhaps a century or more.    If music performed in religious services in denominational Christian churches does not require adherence to particular confessional systems, why should music when performed in concert halls?   One feels that Rosen should have got out more, and listened to some actual religious music as part of actual religious ceremonies in actual places of religious worship before accusing others of insincerity.
Moreover, Mendelssohn was, by all accounts, both religious and well-read in the theology, including the non-Christian theology published in his time.   One can be deeply aware of spiritual forces without having beliefs that can be articulated in words, or even any beliefs at all, as I have argued often (e.g., here).   Who knows at this remove what Mendelssohn’s beliefs were, but we do know he was deeply influenced by ideas of sufism and related spiritual practices.  (We know this because he said so and because he wrote music setting poetry which expressed such ideas.)  With such a world view,  music as an aid to pious devotion may have been exactly the result that Mendelssohn sought to achieve in writing his religious music.   Despite Rosen’s claim that Mendelssohn’s music  “neither expressed nor represented anything”, there are many other possible purposes besides these two for music, and for its composing, its performing, and its listening.  (I have compiled a list of potential functions here.)  Rosen’s view of the purposes of music seems remarkably impoverished for someone so proficient in its practice.
So when I first read Rosen’s criticisms of Mendelssohn’s music (in Rosen 1998) I took them to be a post-hoc attempt to justify his prior musical tastes.  He did not much like Mendelssohn’s religious music, it seems, and tried to support his aesthetic position with an attempt at an objective argument.  But his argument, as we have seen, lacks justification and reveals someone ignorant of religion (and perhaps of music, dare it be said); his argument should compel nobody.
And now, in another response to Rosen’s death, The New York Review of Books, has republished excerpts from a book review Rosen published in the NYRB on 1987-05-28.  Speaking of Chopin, Rosen wrote:

Although he was never tempted by the strict fugue to write one except as an academic exercise, he was the greatest master of counterpoint since Mozart. The sense of the movement of independent voices informs his work from the beginning of his career, and is paradoxically most marked in the Mazurkas, where the popular folk element is also at its most powerful. The late Mazurkas often imitate fugal writing, and the last published Mazurka even has an elaborate canon at the end.”

Chopin the greatest master of counterpoint since Mozart??!!   Rosen has clearly never heard Mendelssohn’s String Symphonies, written when the composer was still a teenager.  The last several of these dozen contain final fugal movements that are the equal of the fugues in Mozart’s last symphonies.   And what of the fugue that comprises the final movement of the Octet?   And what, too, of Beethoven, also no slouch in counterpoint?
But Rosen gives himself two outs:  Chopin it seems did not publish his fugues, which of course makes it hard for anyone other than professional musicologists to actually check Rosen’s claim here.  And secondly, Chopin’s ability as a counter-pointer is assessed by Rosen not by actual counterpoint in fugal music he composed but music “informed” by the movement of multiple independent voices.  Writing music informed by fugal ideas is vastly different from writing fugues, as anyone who has tried to write them knows.    I could claim to be the greatest violinist since David, not on the basis of my actual violin playing but on the basis of fast finger-tapping I do which is informed by my fiddle-playing.
Surely not more ignorance of music?  Or simply another attempt at a post-hoc justification for a prior aesthetic preference?  One wonders just what Rosen did have against Mendelssohn that he could not even admit his abilities in counterpoint?
Bibliography:
Charles Rosen [1998]:  The Romantic Generation.  Cambridge, MA, USA:  Harvard University Press.
The photograph is of Thomaskirche, Leipzig, where Bach was cantor, and where Mendelssohn led a performance of Bach’s St Matthew Passion in 1841.