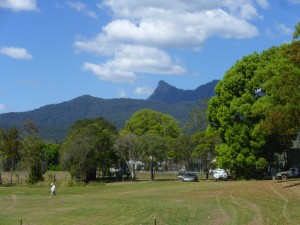 The Brass Band of the Queensland Conservatorium of Music is the only English-style brass band in an Australian tertiary music college, which says something about the impoverished musical taste of those who run Australian music education institutions.   Because the brass are mostly little-used in orchestral music (relative to, say, the strings, who play all the time), orchestral brass players usually also play in other brand ensembles and bands, both for the practice and to build their stamina.   So a distaste for brass band music is usually not something shared by orchestral brass players.  And a good thing too, given the high calibre of the best brass bands.
With about 100 other people, I caught the QCM Brass Band last weekend, performing as part of the 21st Tyalgum Festival of Classical Music.    The band was led by Peter Luff and Greg Aitken, both of the QCM.  The festival began in this small and isolated mountain village after some performers had experienced the very good acoustics of the Tyalgum Literary Institute Hall, the main public hall in the town.   The acoustics of the Hall are indeed excellent, although surely not of a design praised in modern architecture schools.   The Hall, built in 1908, is a single rectangle, with side walls made of wooden planks, having many windows and doors.  On one side is an enclosed verandah, open to the main room.  The roof has a single pitch and is made of corrugated iron, and there is no ceiling – the iron reflects sound well, and the undulations would send it in all directions.  Mostly, the band sat on the floor at the front beneath the stage, with only the percussion on the small stage, yet the sound in the middle of the room was clear, very full and very loud.  The reverberation was noticeable but not overly long.    Apart from rust (and thus the need for regular replacement), the only downside of corrugated iron roofs is that nothing else can be heard when it is raining.
Tyalgum lies under the calming shadow of Mount Warning, a mountain named by James Cook in 1770, and which is the first place on the Australian land-mass to see the sun each morning.   We could see the close-by mountain from inside the hall.  So it was fitting, then, that the walls were decorated with several paintings of the mountain.  Oddly, though, all these images showed the mountain from the usual eastern vantage point, yet the village itself is on the western side.   So what you saw on the walls did not match what you saw through the windows.  (For that matter, the same wrong view of the mountain is on the Festival poster and web-page.)
The Band made very good use of the space.  A fanfare by Ann Carr-Boyd was played before the concert from the upstairs front windows to people in the street.  This fanfare was repeated inside at the start of the concert, with the composer present in the audience.   Later, a piece by Gabrieli for three brass choirs was played with the choirs arranged around the hall:  At the front, 5 players in SAT (Soprano, Alto, Tenor) instrumental combination, at the side under the enclosed verandah (ATB) and in the first-floor balcony at the back (SAT).  This was superb use of space for surround sound, and stunning playing.
There were some moments to treasure.   The open side doors allowed a sudden breeze to blow away the music of the tenor trombone during the Vivaldi.    As with any music from this period, intonation was difficult, particularly for the horn player, and at times for the two solo piccolo trumpets.   With lots of fast-moving duo passages (the horn with one or other trombone) – very typical of Vivaldi – creating havoc for the three performers accompanying the soloists, it is perhaps not surprising that one trumpet soloist had a look of absolute astonishment on his face when the players ended the third movement together.
The pieces for the full ensemble were all well played, although perhaps more attention was needed to choreography of the percussionists.   Some of the 5 people who were at one time or another on stage in the percussion section appeared unfamiliar with that part of the band.
The complete program was:

Some of the same players were seen here.

0 Responses to “Brass in Tyalgum”