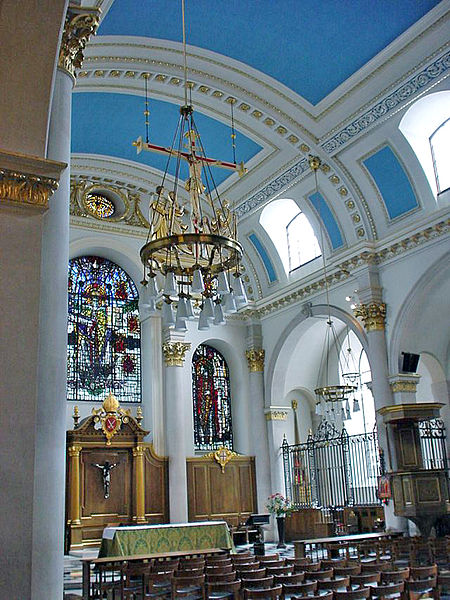 Another superb concert in a London church with an Australian connection. This was the church of St Mary le Bow, on Cheapside, which hosts a bust of Captain Arthur Philip, first Governor of NSW, as well as a memorial to the 5488 members of the Royal Australian Air Force who died in Europe in WW II. The flag of the RAAF is hung alongside the memorial, near to the only other flag in the Church, that of the Order of Australia, the Australian Honours system. One wonders why the RAAF plaque is not in St Clements Danes, the home church of the Royal Air Force, and why the OA flag is in a London church rather than an Australian one. Perhaps Australian Governments are embarrassed that the national honours system is, like all else, legally a gift of the British Monarch.
The current church is Wren’s design, although rebuilt after bomb damage in WW II. It is almost exactly a square in shape, and the walls hardly decorated. Indeed, the Australian paraphernalia comprises almost all the decoration. The ceiling is very high, and the uncluttered stone walls and columns provide a good resonance – perhaps almost 2 seconds. In short, a perfect place for such a concert, with the trumpet standing in the organ loft at the back of the church. The organ is new (2010), by Kenneth Tickell and Company, and has strong French and South German influences.
The organist was Richard Hall, senior organ scholar at King’s College London, and the trumpeter, Robert Landen, a student at the Royal Academy. Their programme comprised:

The playing was simply excellent, precisely together, extremely clear, and alive. The diversity of stops on the organ and the dynamics on both organ and trumpet were much varied, and seemingly prepared with intelligence and deliberation. Clarke’s suite includes his most famous melody and was perfect for this acoustic. The Leighton Toccata included a wonderful Mendelssohnian climb – a stretch of ever-increasing tension, with both rising pitch and volume, and then doubling back and again rising, again and again, all the time delaying resolution (as in the orchestral number that opens Elijah, or the rising wave of the Hebrides overture). Finally, parts of the Eben work reminded me of Jon Hassell’s moody and spiritual trumpet in albums such as Fascinoma (also recorded in a church).
This was a superb and inspiring performance, and a wonderful meditative excursion in the midst of a busy day. One hope these two performers could collaborate on a recording to allow us to relive this experience.
POSTCRIPT (2013-02-23):  For a limited time, organist Richard Hall can also be heard here, in a recording of Choral Evensong in the Chapel of King’s College London.

0 Responses to “Organ and trumpet at Mary le Bow”