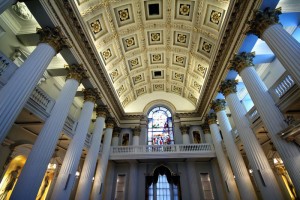 The Great Egyptian Hall of Mansion House in the City of London was the venue last night for a concert by the Orchestra of the Age of Enlightenment, under Edward Gardner.  The first half saw a performance of Mendelssohn’s E minor violin Concerto by Alina Ibragimova, as well as a Rossini overture.
I discerned nothing Egyptian about the Great Hall.   The decorations include various Greek statues, some in states of undress, large stained glass windows at each end of the room, and miscellaneous pottery. The hall is long and rectangular, two very tall stories high (with a gallery running around the upper story), with nine tall stone columns down each side, and all topped with cylindrical roof.   Apparently, the building is 250 years old this year.
The performers were raised only slightly above the level of the audience, and sitting at one end of the rectangle. There were about 20 rows of seats of 20 seats each, all full, so the room had about 400 people present. The placement of the seats could have been much better than it was: staggering consecutive rows may not look as nice to eyes seeking symmetry, but it allows people not to be sitting directly behind one another, and thus gives the audience a better chance of seeing the performers.  Likewise, allowing room between seats, rather than forcing all seats to touch their neighbours, allows for those of us with normal size bodies to sit beside each other.   Only a small percentage of people – those who were at least 6’6″ and very thin – would have been comfortable with this placement of seats.
Its shape and dimensions mean the Hall probably has very good acoustics for opera, or oratorio, or trumpet concertos, where performers stand facing the audience, projecting sound outwards horizontally.   Similarly, for piano concertos, at least when played on a grand piano with an open lid.  When the orchestra played alone, the sound was loud, full and direct, and was quite clear even at the back.   When the solo violinist began, however, her sound went up, not out, and disappeared into the ceiling, 60-odd-feet above us.   Sadly, the result was perhaps the least satisfying performance of Mendelssohn’s concerto I have ever experienced.   One could tell Ms Ibragimova was very good just by looking at her playing; one could not unfortunately confirm this by listening, as the sound of her instrument was so weak, overwhelmed in those passages where the orchestra played, and only ever a plaintive whisper when playing alone, like a small child trying to speak when surrounded by a party of loud-talking adults.
The third movement struck me as taken a tad too fast, with the orchestra panting to keep up with the violin.  And playing original instruments always means risks, especially for those instruments which have experienced significant technological change these last two centuries.  Thus, we should not be surprised that the horns entered this movement slightly sharp, since intonation was always (and always is) a problem for original horns.   The technological changes of modern instruments were not introduced for no reason, a view lost on those riding the original instruments landau.
In conclusion, a very fine and confident performance of the Mendelssohn concerto for everyone sitting in the first few rows.   For the rest of us, a great performance of the orchestral part, since that is what we could mostly hear.   The careers of artists are not enhanced by performances in halls with poor acoustics.   The acoustics could be improved greatly with the installation of a suitable canopy over the orchestra – a curved ceiling to catch the violinist’s sound and bounce it back out and down toward the audience.     In the meantime, memo to self:  avoid performances of violin concertos in The Great Egyptian Hall of Mansion House.
I notice that Mendelssohn himself, despite his 95 public performances in Britain, does not seem to have ever played in this room (according to the list of his UK performances in Appendix B of Eatock 2009).
UPDATE (2012-08-20):  Apparently the violin sound was fine from the double bass stand.   And presumably the FT’s reviewer was seated near the front, given his praise for the room’s acoustics.  The reviewer for The Arts Desk, in contrast, also had problems with the acoustics of the Hall and too thought the third movement of the concerto was taken too fast for the orchestra:

The Mansion House acoustic may be fine for annual speeches from the Chancellor of the Exchequer, but it is not a solo violin’s friend.  .  .   .  .  .
We also suffered in the concerto’s finale from a mismatch between orchestra and soloist, which Gardner, for all his alert gestures, seemed powerless to prevent. Mercurial arabesques flew from Ibragimova’s fingers, with the orchestra always a fraction behind, panting to keep up like PC Plod.  Maybe Ibragimova just wanted to get the concerto finished, for there were certainly signs here and there of a lack of interest in what Mendelssohn had to offer.  Most violinists pounce on the finale’s playful opening arpeggios as a chance to wink and scintillate.  Ibragimova left them uninflected.  “Boring, boring,” she seemed to be saying; “Now, where’s my Roslavetz?” “

0 Responses to “Canopis in Egypt”