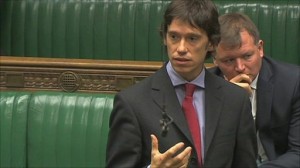 What is the point of a parliamentary debate? It isn’t about changing MPs’ minds or their votes. It wasn’t, even in the mid-nineteenth century. In the 1860s Trollope describes how MPs almost always voted on party lines. But they and he still felt that parliamentary debate mattered, because it set the terms of the public discussion, and clarified the great national questions. The press and public galleries were often filled. Churchill, even as a young backbencher, could expect an entire speech, lasting almost an hour, to be reprinted verbatim in the Morning Post. MPs put enormous effort into their speeches. But in the five-hour debate today on the judicial sentencing council, the press gallery was empty, and for most of the time there was only one single person on the Labour benches – a shadow Minister who had no choice. And on our side, a few former judges, and barristers. For whom, and about what, were we speaking?

The Lord Chancellor, Ken Clarke, used his speech for a genial seminar on the law, parliament and the press – teasing MPs for their complaints about judges, and reflecting: “When I was a young boy, the right-wing press complained about soft judges and soft sentences. They still do. And I am sure they will in fifty years’ time – if they survive that long.“ The Member for Guildford talked about the horror of burglary and called for tougher sentences. The member for Broxtowe, Anna Soubry, who had been in criminal law for over twenty years, talked about the daily challenges in court.
They were good speeches, rooted in expertise and long experience. But I felt they could have been made also outside the chamber. For me, the big question, which belonged uniquely in parliament, was not how to improve the sentencing council in detail but whether we should have it in the first place. The new sentencing council was introduced by the last government to provide guidelines for judges, and stop discrimination (ensuring a burglar in Penrith was punished like a burglar in Poole). It does so through making judges tick boxes, and follow a flow-chart to a recommended sentence. Grievous bodily harm, for example, requires considering 19 factors – aggravating, and mitigating, statutory, and non-statutory – which generate 3 categories, to which 25 additional non-exhaustive factors are attached, in the first two steps of nine. Judges can only ignore the guidelines at the risk of going to the appeal court. This has produced more consistency. But it is wrong.
Government, through parliament, can define crimes, and punishments. But it should never push into the courtroom itself and try to micromanage court proceedings. The metrics don’t work because the different circumstances of each crime, the criminal, his history, and the appropriate punishment, are not things which can be reduced to a mathematical formula. We appoint judges precisely to provide the intuition, sensitivity to context, and experience which a formula lacks. And judgement is not simply a technocratic process of analysing evidence. It is about moral choice. The judge has to weigh the crime and the criminal alongside the conflicting principles of deterrence, protection of the public, rehabilitation and – in the fullest sense – justice. A check-list is not ethical reasoning.
And – this is more controversial – the sentencing guidelines weaken the jury, because they make it almost impossible for the jury to know the relationship between their verdict and the likely sentence. In the past, through ‘pious perjury’, a jury, which thought a sentence unjust, could protect a criminal by ruling him not guilty, or guilty of a lesser crime. They used this power to show mercy when minor crimes held a mandatory death sentence. This was, of course, a dangerous power: juries are supposed to follow the law, not second guess it. But in exceptional circumstances, the jury’s raw power to control the sentence through the verdict is an ultimate protection for citizens against the judicial system and against the government. Juries have used it to defy oppressive governments by refusing to convict dissidents of libel. And even today, juries will not find people who have participated in an assisted suicide guilty, because assisted suicide carries a life sentence.
This complex sentencing algorithm, therefore, by restricting the judge and further distancing the jury from the sentence, weakens both guardians of our liberty. It reflects our culture’s obsession with metrics, quantification, and formulae for everything from landscape protection to international intervention. But our liberty relies on humans. We give power to 12 ordinary jurors not learned specialists because we are best protected not by pseudo-science but by common-sense, human relationships, compassion, and common understanding. And the judge’s most precious possession is not his learning but his human judgement. To force rigid formulae and check-lists – the natural machinery of all governments –into the court-room, is to allow the government to dominate that which was designed to protect us from government. It is ill-advised and unconstitutional.
So, at least I argued. But to what avail? I won’t count the number of hours I put into writing the speech, on top of the five hours in the chamber. I spoke to an audience of six, and there was no opportunity to vote, still less abolish the sentencing council. Sometimes – perhaps twice a year – parliament can do something unexpected and change government policy (I think I managed that on mobile phone coverage, last year). But generally a speech is simply a page in a parliamentary record, a message in a bottle, to some unknown, perhaps non-existent, reader. So, it is with some relief that I am now heading back up to the weekend’s events in Penrith, Longtown and Kirkby Stephen. I love constituency work, and I can see the point of government. But parliamentary debate still perplexes me.”

0 Responses to “The mechanical judiciary”