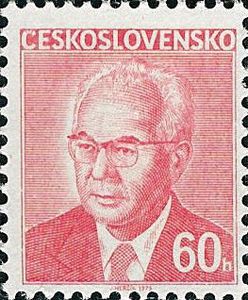 Posting recently following the death of Vaclav Havel, my mind returns to a question that has long pre-occupied me.  What did Havel’s predecessor as President of Czechoslovakia, Gustav Husak, think of communism and of his role in it?  What did he think he was doing, at the time and subsequently?
Husak was a leading Slovak communist from before WW II (taking part in the brief Slovak National Uprising in September 1944), and afterwards.    However he fell victim to the Stalinist purges and trials that took place across most of Eastern Europe of the early 1950s (some of which which I wrote about here), and he spent the years 1954-1960 in prison.   Although most of the purges in Czechoslovakia at that time had an anti-semitic aspect, I do not believe he was Jewish. What does such an experience do to a good communist?  Does he, like Koestler’s bolshevik, Rubashov, come to believe that the Party, possessor of objective truth and the imprimatur of history, must always be in the right, and that therefore he, despite the evidence of his own lying eyes, is in the wrong?  Or does he maintain his innocence, believing that some error of judicial process has been made?  Such a view may require courage in the face of injustice and evil, as shown by Husak’s compatriot, the very brave Milada Horakova.   Or does he reject his prior beliefs in communism altogether, turning apostate like Cristóvão Ferreira, Portuguese Jesuit-turned-Shintoist, and the subject of Shusaku Endo’s great novel, Silence?    Or does he become some Vicar of Bray character, sailing – cynically, opportunistically – in whatever direction the prevailing winds point, not really believing or disbelieving anything?   A man is rarely just one straight thing, and someone may be each of these at different times in his life, especially someone sitting in prison with lots of time to think.
Husak was subsequently rehabilitated by the KSC, and served as Deputy Premier of Czechoslovakia from April 1968.  Was he appointed then because the reformers around Alexander Dubcek considered him a reformer too? Perhaps he was viewed by them as akin to the Polish communist leader, Wladyslaw Gomulka, who had also been detained in the purges of the 1950s (although never tried or convicted, nor even, apparently, interrogated), and later rehabilitated and made leader.  If Husak was indeed a reformer in April 1968, then why did he adopt a collaborationist line after the Warsaw Pact invasion of Czechoslovakia in August?  Was he, like the later Polish leaders, Wojciech Jaruzelski and Mieczyslaw Rakowski, convinced that collaboration was the only feasible and patriotic path for a national state inside the Soviet empire at the time.   General Jaruzelski still maintains this position regarding his imposition of martial law in Poland in 1981.  If, instead,  Husak was a not a reformer in April 1968, was he actively duplicitous, or merely some Vicar of Bray.
And after the fall, when the KSC-dominated Parliament of Czechoslovakia voted unanimously in December 1989 for Havel to be President, what then did Husak think?  That the winds had once again shifted, and that it was time once again for All-Change?  Or that, despite the revisionist winds, blowing this time from Moscow itself,  he had been right all along to be a communist, and that history, far from having ended in the present, would at some future point judge him so?
A Polish journalist, Teresa Toranska, published in the twilight days of Polish communism a series of interviews with leading communists who had led the party at its rise to power four decades before (Toranska 1988).  What was striking to me when I first read these interviews twenty-odd years ago was the variety of responses of those interviewed:  from regret and sadness, through to defiant recalcitrance.   Some begged forgiveness for what they had done or been complicit in.  Some had, apparently, subverted the system from within (for example, Stefan Staszewski secretly printing and distributing multiple unauthorized copies of Khrushchev’s secret speech to the 20th Congress of the CPSU in 1956).  Others thought only that mistakes had been made, although apparently not by them.   Still others, like the Bourbons, had learnt nothing and forgotten nothing.  I am intrigued by where Husak would have placed himself in this cabinet of wonders.
And, as always, how interesting it is that colonial empires so often collapse from the centre – France in 1958, Portugal in 1974, the USSR in 1989.
POSTSCRIPT [2012-01-21]:  Some of the diversity of views of Party members is shown in the first part of Krzysztof Kieslowski’s 1981 parallel-worlds film:  Przypadek  (Blind Chance).
POSTCRIPT [2012-04-08]:  And here is Margot Honecker, as obstinately recalcitrant as a rhodesian whenwe.
References:
Shusaku Endo [1966]: Silence.
Arthur Koestler [1940]: Darkness at Noon.
Teresa Toranska [1988]:  Them:  Stalin’s Polish Puppets.  HarperCollins. Translated by Agnieszka Kolakowska.